Victims Speak Out – Our Experience of Being Stalked, Defamed and Vexatiously Sued by Ken “Pastor Max” Parks

Victims Speak Out – Our Experience of Being Stalked, Defamed and Vexatiously Sued by Ken “Pastor Max” Parks

I have published this website due to my estranged older brother Ken “Pastor Max” Parks repeatedly weaponizing the courts to file pro se meritless, defamatory, and abusive lawsuits against my husband Scott L. Buchanan and me, and many other people.  My brother has lost every pro se lawsuit he has filed.  My brother’s meritless, abusive pro se lawsuits have forced my husband and me, and my brother’s other victims, to spend multiple tens of thousands of dollars in legal fees simply to defend our innocence to get his lawsuits dismissed.   All the while my brother Ken “Pastor Max” has falsely publicized on various sites on the Internet that he has “won!” his lawsuits against us and his other victims that he sues pro se, and has falsely claimed that my husband and I have been “ordered to pay!” either court fines or judgments to him.

This website with all its verifiable documentation serves as our affidavit; my husband and I have already sworn under oath that many of the facts and statements published in this website (and in two previous websites) are true and accurate.  Furthermore, most of the detailed facts and reasonable commentary in this website have already been included in or alluded to in public court documents.

Since late 2000 – without any provocation or contact from us or many of his other victims – my brother Ken “Pastor Max” Parks has published multiple social media posts and dozens of websites defaming, libeling, and inciting others against us and his other victims.  We and his other victims were able to get web host companies and social media companies to remove many of his websites and social media posts due to his violations of their terms of service agreements.  Yet in every single one of the meritless, abusive lawsuits my brother Ken “Pastor Max” Parks has filed pro se against my husband and me he has knowingly and deliberately accused us of doing the exact offenses he has actually committed against us, without once mentioning in the hundreds of pages of his court filings that he has been publishing multiple defamatory, libelous websites and social media posts against us and many other innocent victims since at least 2000.  In legal terms these kinds of abusive litigants are defined as having “unclean hands,” meaning that my brother Ken “Pastor Max” Parks is actually guilty of the very things that he falsely accuses us of doing and has deliberately attempted to deceive courts about these facts.

Below are examples of my brother Ken “Pastor Max” Parks’ Internet published statements boasting about “winning” the first pro se lawsuit he filed against me in 2004, openly admitting to the fact that he filed his meritless, defamatory lawsuits for the sole purpose of costing us attorney fees.  He published these posts under the name “Churchill.”  In his article in one of his previous websites, “Paulette Buchanan Losses (sic) In Civil Suit,” he bizarrely wrote it in third person, as if someone else interviewed him. 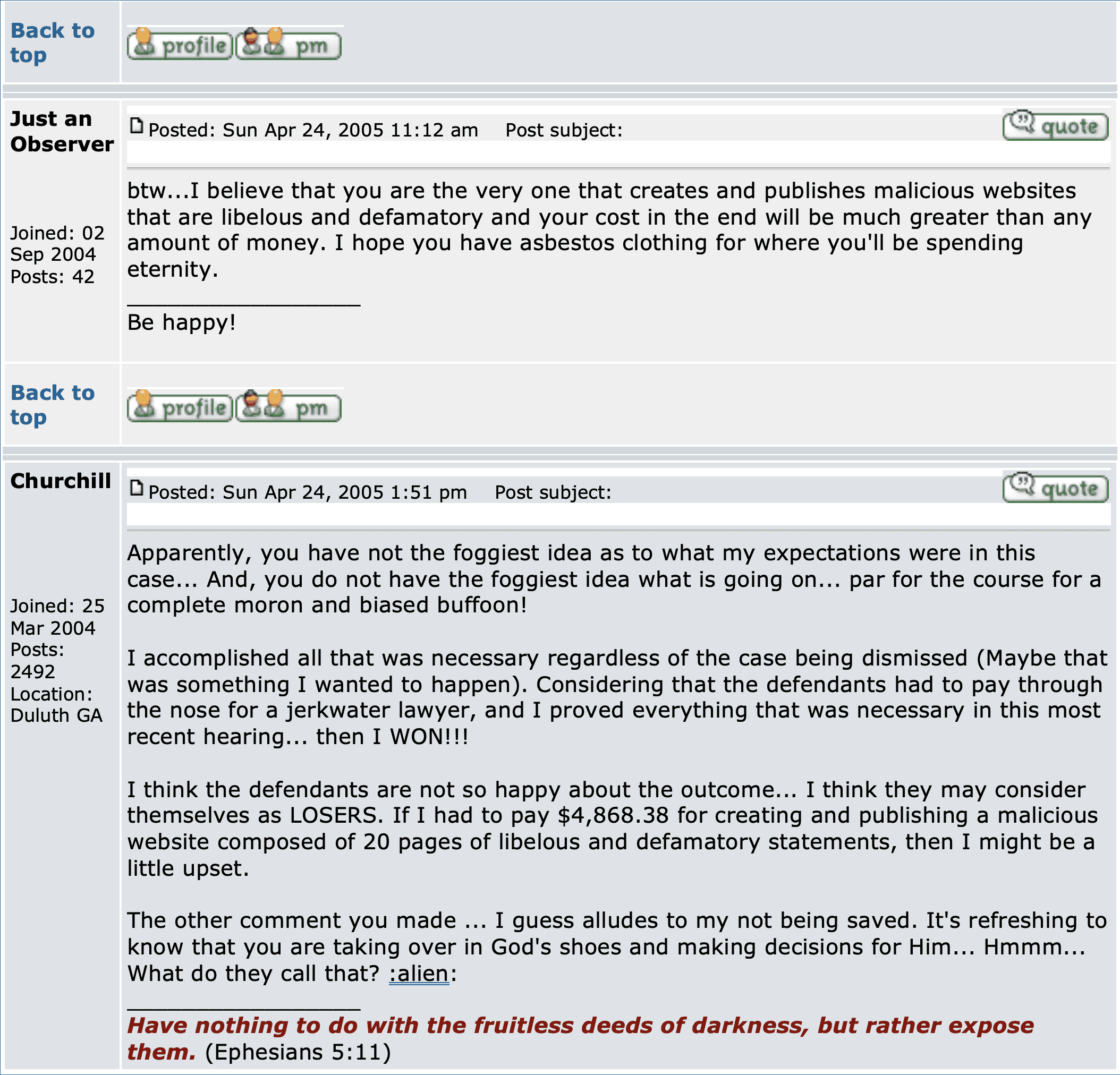 Paulette Buchanan, one of the defendants in a civil law suit filed by Ken Parks for her libelous and defamatory web site, was Court ordered to pay her legal fees of more than $4,800.00. Ken proved that his filing was not “frivolous” as purported by the defendants, Paulette Buchanan and her second husband, Scott Buchanan.

In late July of 2004, Paulette Buchanan and Scott Buchanan produced a libelous fool-hearted website. Ken Parks was the primary target, and its content went well beyond the protection of the U.S. Constitution’s first amendment.

Their maliciously outrageous website contained 20 pages (MS-Word document file size) of blatant lies, fabrications, and half-truths with the sole intent to defame and cause personal injury to Ken Parks and his profession.

Ken realized that their bizarre obsession was not going to end. Therefore, he sought counsel from an attorney friend and several others. The general consensus was to take them to Court. Ken filed the Court documents along with a letter, asking Paulette Buchanan and Scott Buchanan, henceforth “the defendants,” to retract their lies and apologize. Instead of responding to the letter, they decided to hire your everyday standard liar… er… lawyer, henceforth called “Waterboy.”

Ken prepared with the same eagerness, fortitude to win, and caution as he had done in previous Pro Se cases. Ken warns other men, “I was up against the biased Gwinnett County Court system (biased against men) and their hard-nosed judges. I prepared overwhelming evidence to show that my libel suit against the defendants was not the purported and claimed ‘frivolous” case.’ Furthermore, it was my plan to show the Court how the defendants have acted in a manner that is considered malicious and obsessive disorder in their several attempts to cause personal injury, disrupt my life, and try to defame my character.”
.
.
.
Ken rebutted “Your honor”… I thought this to be a contradictory title and I continued… “I’m here to answer to the allegations which was filed to this Court and I received in the defendant’s ‘Motion for Attorney Fees.’ I am not prepared nor will I answer to the defendant’s newly unfounded accusations.”
.
.
.
The libelous website was rather expensive, costing the defendants, Paulette Buchanan and Scott Buchanan, $4,868.38 USD. 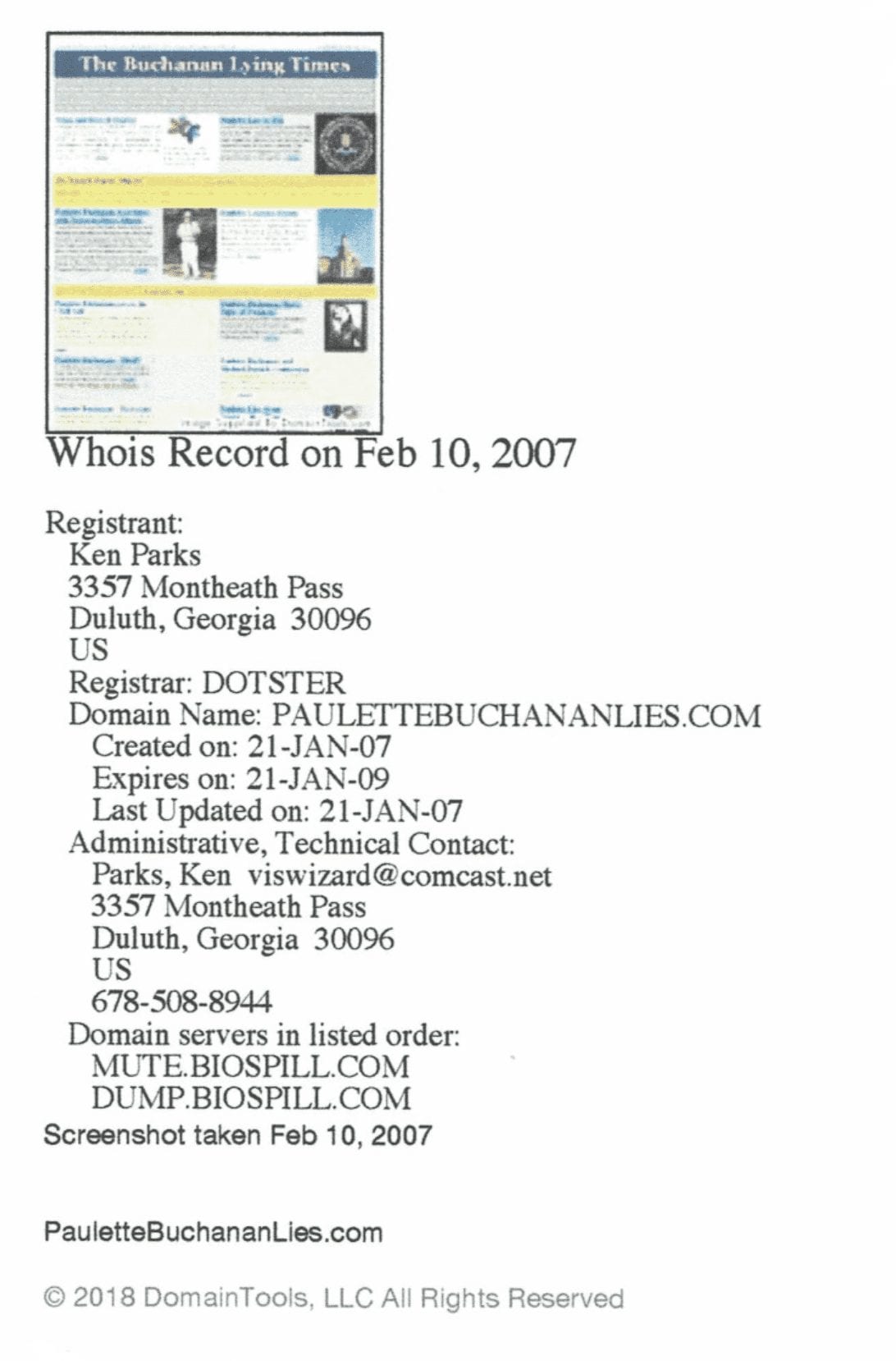 In the February 2019 deposition by Ken “Pastor Max” Parks’ wife Joni Parks, taken while she was under oath, she falsely claimed that in 2004 a judge ordered our previous well-documented website, ministrywarning.com, to be taken down. That website wasn’t published until late 2005. In reality, there has never been any judge anywhere at any time who verbally or in writing banned us from exercising our free speech right to publish either our 2004 website therealkenparks.com, or our 2005 website, ministrywarning.com and same content website photographerscam.com. My husband and I were advised by attorneys to publish those websites and those websites were reviewed by attorneys to ensure they conformed with protected free speech laws. This current website has also been reviewed by an attorney, and, as with our previous websites, details our verifiable and well-documented accounts of all that my brother Ken “Pastor Max” Parks has done to us and to other people.

Joni Parks has also confirmed in a phone conversation with my mother which I witnessed that she believes her husband is a “prophet of Jesus,” and that she refuses to believe the public court and police records against her husband. She has repeatedly stated and demonstrated that she believes all of her husband Ken “Pastor Max” Parks’ libelous, defamatory statements against innocent people and that she is in full support of him publishing those statements. In her 2019 deposition, Joni Parks also admitted to supporting her husband’s actions of filing his pro se lawsuits.

My husband and I are apparently not the only ones getting the word of warning out about my brother Ken “Pastor Max” Parks. It seems apparent that my brother’s own aggressive, defamatory, and harassing words and actions against so many private and public citizens, as well as his own self-aggrandizing statements – including in his own published references to public court cases involving him – are the most likely reasons he apparently provokes some people in the general public to research public records – some of which can be found easily online – and confront him about who he really is, and apparently warn others. If people are actually warning others about my brother Ken “Pastor Max” Parks it seems apparent he has only himself to blame based on his own public Internet posts and his own public civil and criminal records.

If my three other brothers, together or singly, on their own behalf or on the behalf of our brother Ken “Pastor Max” Parks, begin to file pro se lawsuits against me and/or my husband, or engage in any public defamation, harassment, or incitement against us, then they will be named in this website and elsewhere, using the public records they have initiated. This will be done for two reasons: to publish documented facts so as to clear our names of any libel and defamation, and to warn the public about their pro se suing tactics (one other brother also has a long history of filing pro se meritless, abusive lawsuits against many other people).