Since the advent of the Internet cults/coercive groups/new religious movements and fraudulent businesses have increased exponentially.  After the passage of so many years – and so many warnings – it is both baffling and disturbing how many people open themselves up to being taken in by online con artists and scammers.  Anyone can advertise themselves on the Internet as a “pastor,” “guru,” “self-actualization coach,” or claim to be a “professional” in any number of professions.  The bottom line:  If you don’t know these people, if you don’t bother to easily enough look up any kind of registration with the IRS or with their state for their “ministry,” “church,” “business,” etc., if you don’t inquire into their professed educational background, if you don’t bother to check with courts and law enforcement to see if they have any kind of civil or criminal public records then you’re setting yourself up to be deceived, scammed, stalked, defamed and/or sued by an internet predator.

Furthermore, warnings have been published about the use of terms such as “Jesus” and “God” being used on Facebook as lures in order to scam people.  Read this for example.

On May 8, 2017, bipartisan New Jersey legislators passed an act requiring the Departments of Children and Families and Human Services “to jointly study predatory alienation and its effects on young adults and senior citizens” (https://legiscan.com/NJ/text/S2562/2016).  In March, 2020 bipartisan New Jersey legislators took a big step toward protecting its state’s citizens from online predators of all types.  The New Jersey legislature took the results of the 2017 study and proposed the “New Jersey Predatory Alienation Prevention and Consensual Response Act.”  One section of the proposed bill reads:

Predatory alienation tactics and other forms of undue influence are commonly used by cults, sexual predators, domestic abusers, extremist groups, human traffickers, sexual predators, domestic abusers, and other similar persons and groups, as a means to recruit members, carry out crimes, spread their belief systems, advocate their political agendas, or simply impose their will on, and exert power, control, and supremacy over, victims.

Every state needs to enact a bill similar to New Jersey’s proposed bill!  This bill enables family members, friends, school and college officials, law enforcement officers, and others to legally compel those who have been lured and influenced by predatory alienation tactics into mandatory, involuntary intervention counseling and mental health treatment.

My brother Ken “Pastor Max” Parks promotes and advertises himself on the Internet as a “trusted” limited purpose public figure — a self-professed “pastor,” “ministries” leader  of his unregistered “ministries” ETC Ministries and Simplicity of Christ Ministries/SOC Ministries, and as a “professional photographer,” (oftentimes having unregistered and unlicensed “businesses” such as “Weddings Thru the Lens” and “Fotos by Ken”).  My brother Ken “Pastor Max” Parks promotes and advertises himself as a limited-purpose public figure by speaking on a variety of public interest issues in an effort to sway the public to his views.  My brother Ken “Pastor Max” Parks has admitted in public record court documents to promoting and advertising himself as a “trusted” public figure seeking “public trust.”  One example of this is shown below — page 10 of a publicly accessible court Complaint my brother Ken “Pastor Max” Parks filed on April 30, 2015 in his third meritless, harassing lawsuit against my husband and me in New London, Connecticut (the case, KNL-CV15-5014893-S, was dismissed with prejudice, meaning that he is legally prohibited from filing the same lawsuit against us).  He was never able to produce any evidence for any of his claims in his Complaint (such as being successful in any profession), even when the court ordered him to produce proof for those claims. 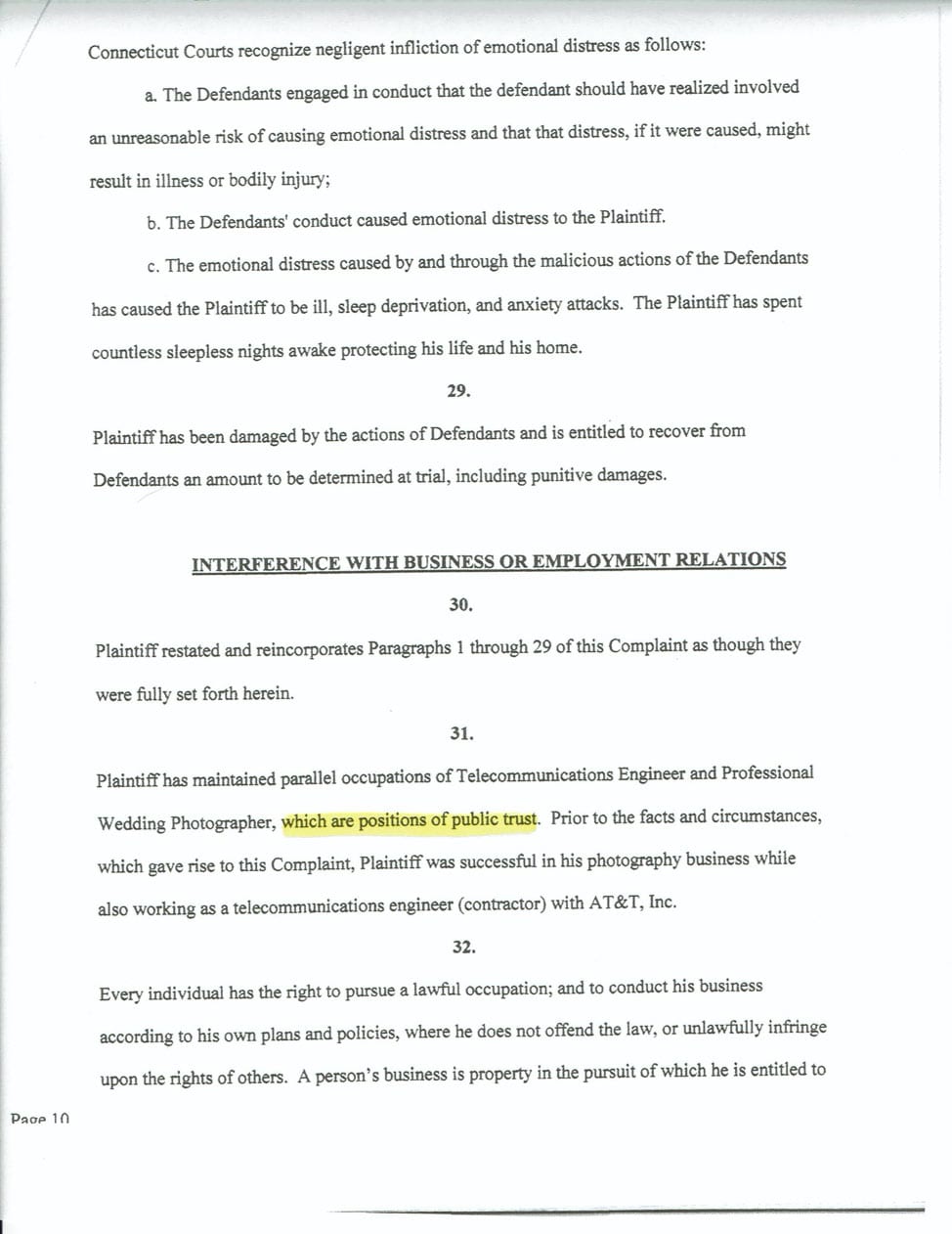 A public figure is a person of great public interest or fame, such as a politician, celebrity, or sports hero. The term usually used in the context of libel and defamation actions, where the standards of proof are higher if the party claiming defamation is a public figure and therefore has to prove disparaging remarks were made with actual malice.

A person may also be considered a “limited purpose” public figure by having thrust themselves to the forefront of particular public controversies in order to influence the resolution of the issues involved. The determination is made on a case-by-case basis, taking the particular facts into account.

The pastor would be limited-purpose public figure because he thrust himself to the forefront of a particular controversy in order to influence the resolution of the issue.