One way or another, my brothers found out about my mother’s death about a year after she died.  In May, 2013 they immediately began to harass cemetery directory Jim Davis of Elm Grove Cemetery to intimidate him into telling them where our parents were buried.  Not one of my brothers even knew where our parents were buried, which by itself I believe speaks volumes about how estranged they were from both my father and mother.  Elm Grove Cemetery director Jim Davis assured me repeatedly that he would not give my brothers that information and that he would pursue police action against them if they kept harassing or threatening him. 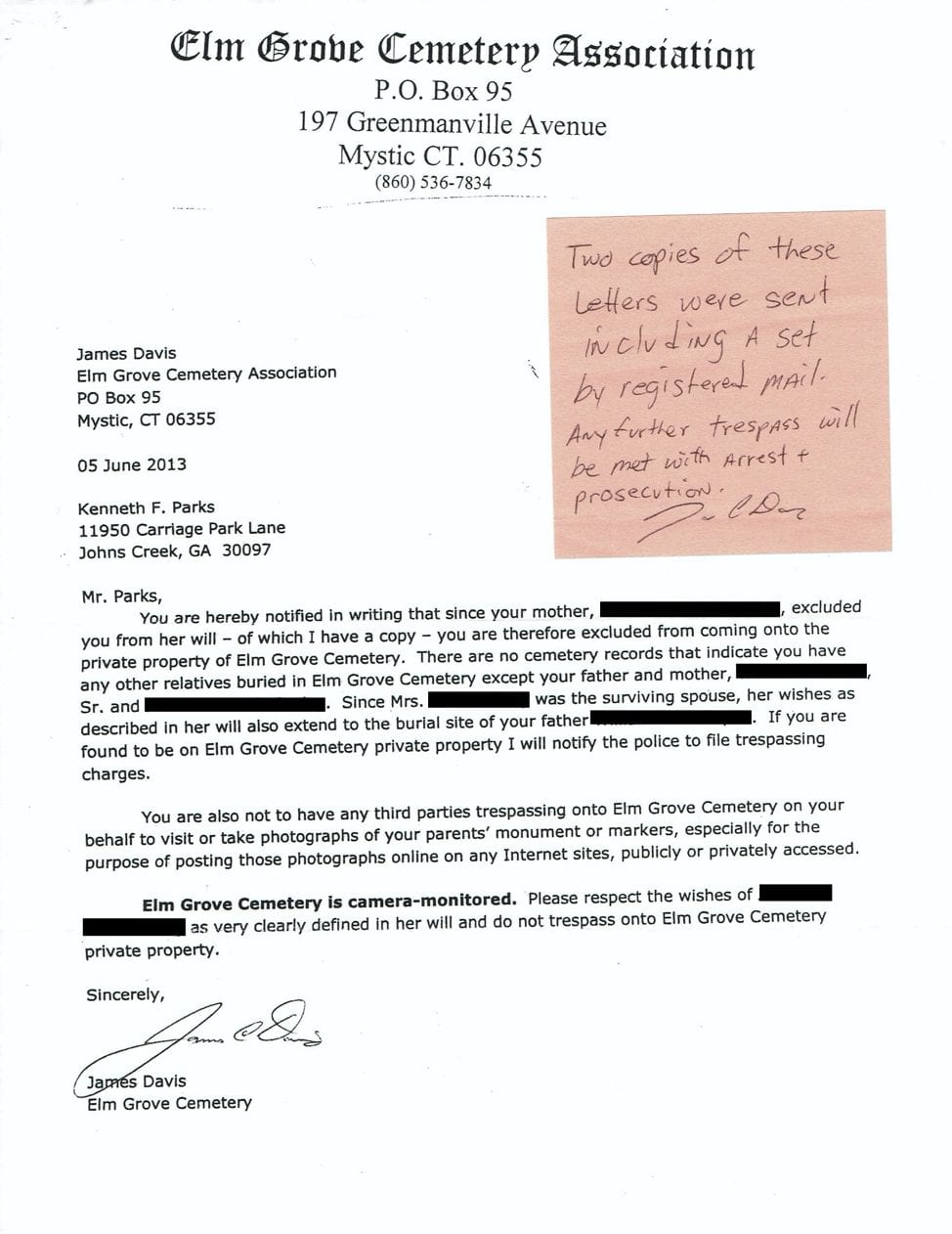 I received a call from cemetery director Jim Davis in July, 2013 in which he informed me that one of my brothers had entered the cemetery grounds, tried to attack him in front of his child, and threatened to sue him unless he told him where our mother’s gravesite is located.  I asked him if he called the police and he said he had but he was uncertain about filing a police report.  I asked him why he would call me to tell me what one of my brothers did to him in front of his child if he wasn’t going to pursue charges against my brother since I couldn’t do anything to stop my brothers.  I told him that especially because he lived on the Elm Grove Cemetery grounds he needed to file a police report for arrest against that brother or he would experience more problems from my brothers against him, his family and against the cemetery.  He promised me he would file a police report, but when I called the police about what the cemetery director told me in his phone call to me the police informed me cemetery director Jim Davis had not requested to file a police report against my brother, so they called him for his account of what happened.

The following police report demonstrates that one of my other brothers harassed cemetery Jim Davis director and that initially a no trespass order was issued against that brother.  This brother also has a long history of filing meritless, abusive pro se lawsuits (threat of lawsuit is mentioned in the police report below), including having filed a pro se lawsuit against our mother in retaliation for the justifiable protective order she got against him just prior to his release from a New Hampshire prison.  In the following police report, this brother deceitfully gave to the police my deceased mother’s former address as his current address (the same house address that in 2013 my brother Ken “Pastor Max” Parks had apparently vandalized and where he had been ordered in early 2014 to stop trespassing and harassing the new owners of my mother’s former house and my mother’s former neighbors). 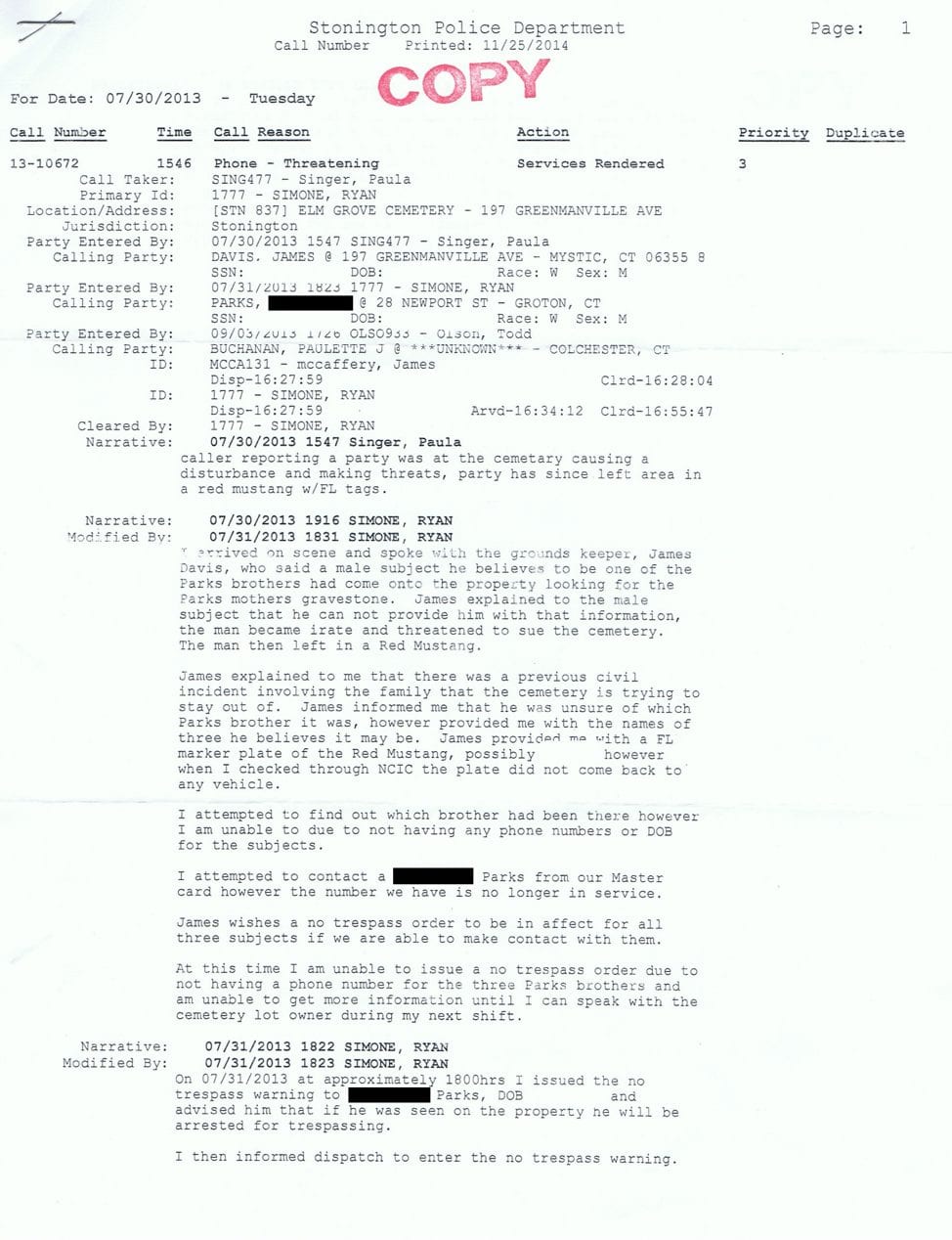 Cemetery director Jim Davis requested several times throughout the following years that I keep him informed of any time I believed my brothers would be in Connecticut or be at our parents’ gravesite, and I followed through on his request.  He verbally told both my husband and me over many years’ time that he did not want any of my brothers in Elm Grove Cemetery, in contradiction to what the 2013 police report stated.  The police verbally told me that cemetery director Davis kept giving them conflicting accounts of what he wanted, telling them at times he did not want my brothers trespassing in the cemetery and then telling them he “changed his mind.”  The captain of the police department told me this was frustrating for the police officers.  The impression my husband and I received consistently from cemetery director Jim Davis was that he was fearful that my brothers singly or together would file one of their pro se lawsuits against him.

In the fall of 2018 my brother Ken “Pastor Max” Parks was outed by people on Facebook for running a ministry “scam” (he is on at least Facebook and Spreely).  He immediately posted on his public Facebook pages his false accusations against my husband and me claiming that we had contacted Facebook and spread lies about him on Facebook, resulting in his “ministries” donations page being shut down by Facebook.  Again, we’re not on Facebook and we did not contact Facebook – but we are very grateful to other people taking seriously the deceitful and predatory actions of my brother Ken “Pastor Max” Parks and for reporting his suspected fraud to Facebook (are they also being stalked, harassed, defamed, threatened with police action or pro se lawsuits, or actually had lawsuits filed against them pro se by my brother Ken “Pastor Max” Parks?).  Immediately after this happened – and just prior to the Washington County, TN judge ruling to dismiss my brother’s fourth pro se lawsuit against us and issuing a judgment and injunction against him – I got a call from cemetery director Jim Davis telling me that he “had to” remove the security camera, claiming that three different people complained about it.  I reminded him that as recently as May, 2017 he and the police had told my husband and me that they wanted the security camera to stay mounted because of ongoing problems with my brothers.  I reminded cemetery director Davis that both he and the police told me they believed the security camera offered good security in light of the long and persistent history of my brothers’ disturbing behavior and valid concerns of my brothers possibly committing vandalism against my parents’ gravesite.  I told cemetery director Davis that a lot of cemeteries have security cameras, especially in historic cemeteries such as Elm Grove Cemetery where my parents are buried.  I expressed my concerns that taking down the camera was setting him and us up for escalated problems from my brothers.  I also told cemetery director Davis that the timing was suspicious so I pressed him on this.  I asked him if the three people he told me complained about the camera were related to each other.   He admitted that they were not.  I asked him if the three people had loved ones who had recently died.  He told me that the loved ones of all of the supposed three people had died some time before, even years before.  Cemetery director Davis then told me that one of the people had picnics on their son’s gravesite.  I told him that since 2013 my husband and I never saw any evidence of that on our security camera footage.  I then commented that I found it very odd that all three people, all independent of each other, all of a sudden complained about a security camera that had been mounted there since 2013.

I asked cemetery director Jim Davis a few times in this phone call that he had initiated if my brother Ken Parks had called him or if any of my brothers had called him.  He claimed they hadn’t.  I updated him on the current court proceedings against my brother in Tennessee (as he had asked me to do if there were any police or court actions against any of my brothers), and I told him that since the ruling was going to hit Ken hard that my husband and I anticipated that any one of them or all of them might go on a rampage in the cemetery.  I told him that the injunction would order Ken to no longer be able file his pro se lawsuits so that not only we would be protected but everyone would be protected from his abusive lawsuits.  I suggested, as I had in previous years, that he contact the cemetery association’s attorney and look into protective orders against my brothers.  He again insisted he shared my concerns about my brother’s actions and he told me he would finally speak to the cemetery association’s attorney and that he would call me back to update me on what the attorney advised.

I waited, and I waited for cemetery director Jim Davis to call me back as he had promised he would do.  I finally got a call from him, and he told me I should be getting something in the mail from the attorney.  I waited again.

During this time in 2018 my husband and I knew Ken had traveled from Georgia to Connecticut for court hearings against him and his wife Joni Parks due to their vexatious litigation and conspiracy actions against us in the 2015 meritless, abusive pro se lawsuit he filed against us that was dismissed with prejudice.  When we received in the mail the camera and camera card our friend sent to us we witnessed that the security camera photos showed my brother Ken “Pastor Max” Parks, his wife Joni Parks, and my oldest brother “visiting” Elm Grove Cemetery.  We also noticed the $2.16 placed at my parents’ gravesite in apparent reference to my brother Ken knowing the name and address of our friend who monitored our security camera.  We reasonably believe that cemetery director Jim Davis has been either intimidated or bamboozled (or both) by my brother(s)’ lies about my husband and me, and we also reasonably conclude that cemetery director Davis likely told my brother Ken “Pastor Max” Parks the name of our friend and possibly where he lived.   We cannot fathom any other way that my brother Ken could have gotten our friend’s name and known at least the name of the town where our friend lives and/or do an online search and find the street address of our friend unless cemetery director Jim Davis had given Ken the name and most likely the address of our friend.

I continued to wait for Elm Grove Cemetery Association’s attorney to mail me a letter.  I finally left a voice mail message with cemetery director Davis to inform him of what we had witnessed with the $2.16 left at my parents’ gravesite, and I also informed him that I had not received anything from the attorney and to please return my call with an update.

I gave the cemetery association’s attorney our Tennessee address and thereafter I finally received the letter.  Although the outside of the envelope was addressed to me in particular, the enclosed letter was not addressed to me or to my brothers or to anyone in particular. The unaddressed letter from cemetery director Jim Davis informed the recipient that he no longer wanted the recipient to contact him.  I then called the Elm Grove Cemetery Association’s attorney about this bizarre, unprovoked letter, and told him this was the very opposite of what cemetery director Davis had told me verbally in the last two phone calls that he initiated with me a few months before.  I then cleared up the many lies told about me and my husband, citing documentation, that apparently originated from my brother Ken Parks, apparently originated from my other brothers, and apparently originated from cemetery director Jim Davis.  In two separate phone calls I made to the cemetery association’s attorney he apologized profusely for all the problems related to cemetery director Davis’ actions.  I told him I would appreciate getting those apologies in writing from both him and from the cemetery director.  Those written apologies were never received. 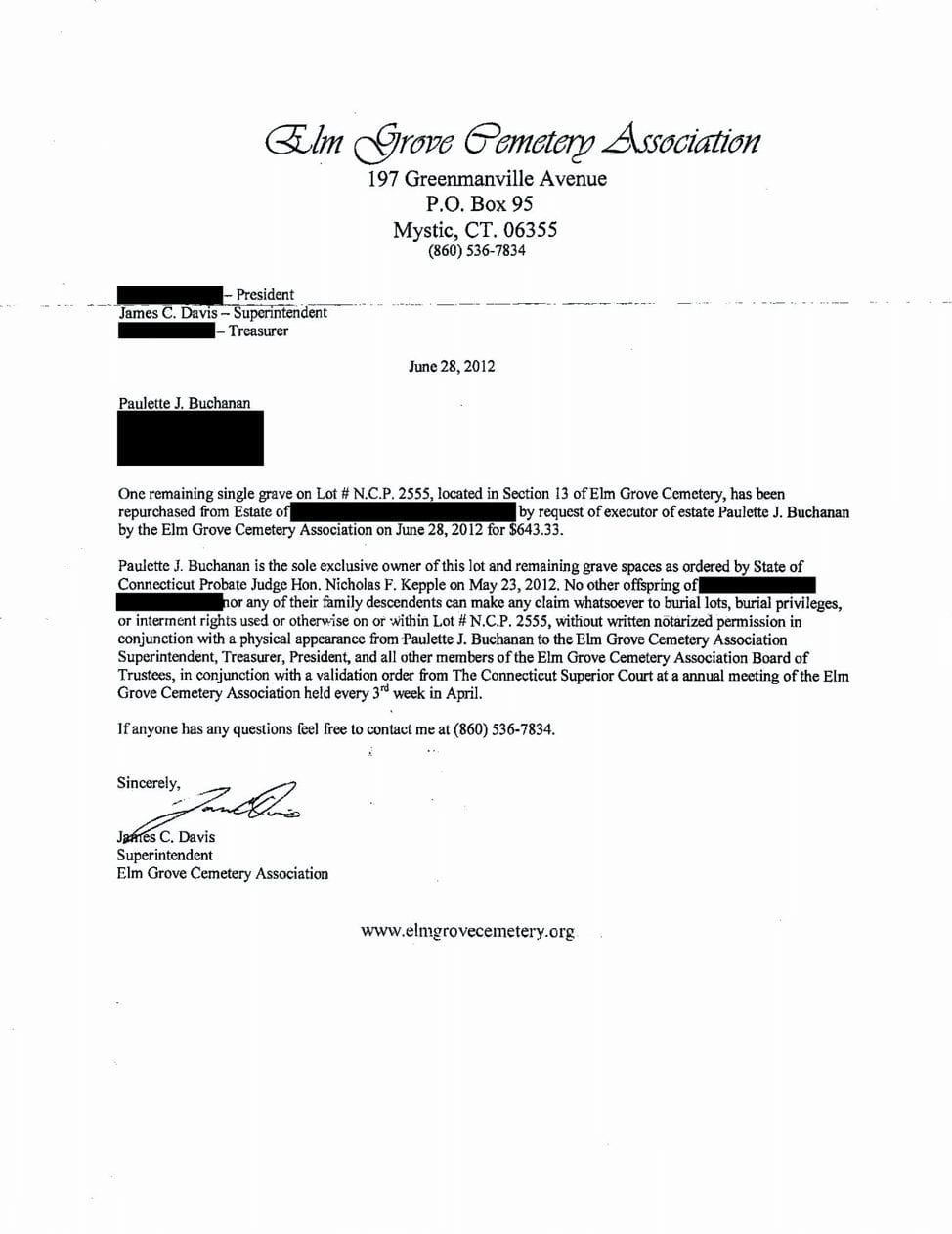 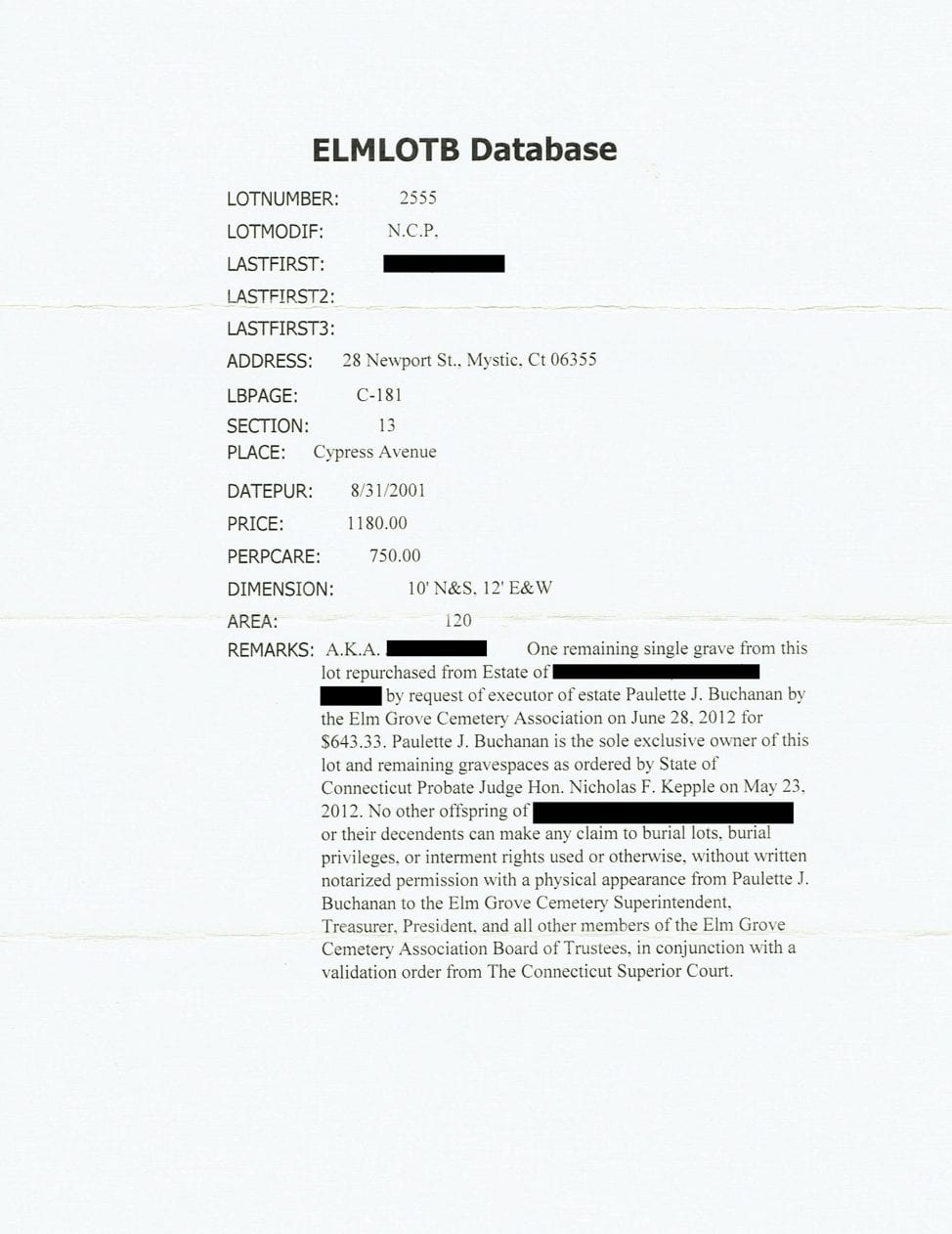 This whole incident with cemetery director Jim Davis illustrates the extent of damage and intimidation that stalkers who habitually file abusive, meritless pro se lawsuits, especially those stalkers and abusive litigants with religious cult motivations, can inflict upon their victims.