In 2005 my husband and I contacted an independent investigative journalist, Michael Barrick. Mr. Barrick wrote two articles of public warning about my brother Ken “Pastor Max” Parks due to my brother advertising himself as a limited-purpose public figure – a “ministries leader” of his ETC Ministries (and his later Simplicity of Christ / SOC Ministries), although his “ministries” have never been registered with the state of Georgia or with the IRS so therefore there has never been any kind of financial transparency or accountability for whatever funds/donations my brother Ken “Pastor Max” Parks may receive from these unregistered “ministries.” Mr. Barrick at that time (2005) worked for Ministry Watch/Wall Watchers, a Christian charity investigative organization helping donors make wise decisions in their donations to religious charities and ministries. Forbes magazine gave Ministry Watch/Wall Watchers a high rating: 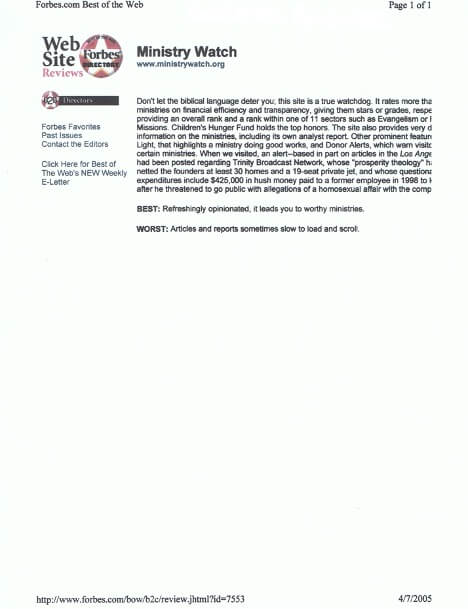 Below is the email exchange that Michael Barrick and Rod Pitzer at Ministry Watch/Wall Watchers had with my brother Ken “Pastor Max” Parks in 2005: 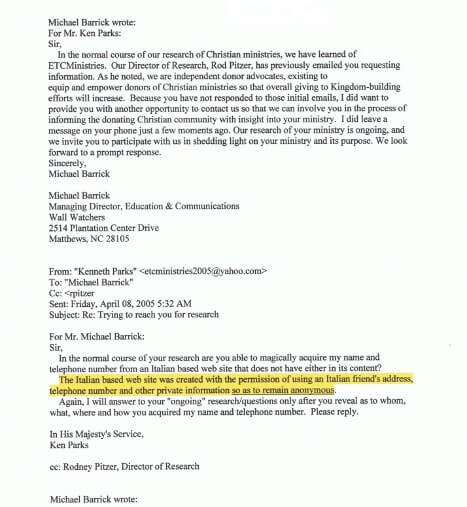 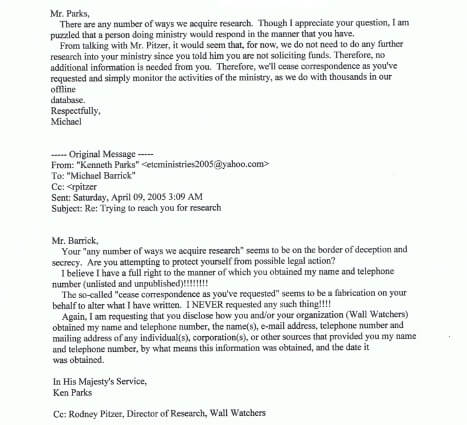 Use of Internet by Georgia man to establish ‘ministry’ and launch verbal attacks raises questions about modern ministry, the Internet, and donors that fall prey to anything labeled ‘Christian’

Compared to the extravagant lifestyles and the mammoth media empires of televangelists like Benny Hinn and Paul and Jan Crouch of Trinity Broadcasting Network, or to the tactics of itinerant “preacher” Leroy Jenkins, who peddles miracle water at his crusades, Ken Parks — last known address, Duluth, Ga. — is, well, insignificant.

But that does not mean he should be ignored. Parks, who markets himself on the Internet as a photographer but has also established an ostensibly Christian apologetics and teaching website — http://etcministries.altervista.org/ (complete with links to well-known Christian retailers), and in chat rooms has labeled himself “a teacher of the word” — does indeed have a history of alleged harassment and numerous run-ins with local, state and federal law enforcement officials.

His “ministry” is not registered with the IRS as a tax-exempt entity, and there is no record of application. He has been allegedly questioned by federal officials for making threats to assassinate then-President Ronald Reagan. He has been arrested for crimes ranging from theft to assault, has a conviction for criminal trespass, and there is an outstanding fugitive status arrest warrant against him for harassment in Connecticut.

Parks replied to initial emails, stating that he would not answer questions. He has not returned numerous emails or calls in the past several months.

Consequently, it seems clear that the use of the Internet by Parks to market his ministry, which could be potentially done for personal gain if he refuses to be transparent, and to launch verbal assaults upon his critics including his own sister, raises questions about what is a ministry, the use of the Internet, and potential donors that could fall prey to anything labeled Christian.

And, because Parks refuses to return calls or emails, it calls into question Parks himself, who ironically, had at one time posted Ephesians 5:11 on his website — “Silence gives sanction to sin.”

Additionally, on his websites and numerous chat rooms, Parks has written articles that include disrespectful comments of local law enforcement and court officials, and uses avatars on numerous websites to seemingly launch vicious verbal attacks and even threats on anyone that subjects him to scrutiny.

Indeed, his sister, Paulette Buchanan, says she lives in constant fear that Parks will return to Connecticut to harm her and her family.

Yet, this is no mere family feud insists Buchanan, who acknowledges that she and her brother have been estranged for about two decades. Buchanan and her husband, Scott, say that Parks’ website and related chat rooms should cause potential donors of Christian ministries to carefully scrutinize Internet-based “ministries” because of their relative low cost, the ease by which they can be constructed and posted, and lack of accountability. They also point to numerous facts and allegations regarding Parks himself that they believe donors should be aware of should Parks ever start soliciting funds for his “ministry.”

Parks is the subject of a fugitive status arrest warrant in Connecticut, meaning that if he should return to the state, he is subject to arrest by law enforcement authorities for charges that include making threatening and harassing remarks through the Internet (via websites and chat rooms) and through email. And, he has had at least one web hosting company remove his website because he did not abide by its terms and conditions after the co-owner of the company was questioned by a journalist. Also, about another 10 domestic and foreign web hosts have taken down Parks sites after family members complained, said Paulette Buchanan.

Yet, he still has a ministry website. The ministry, however, is not registered with the state of Georgia. And questions remain about his resume, which at least one church in the Atlanta area no longer has posted after questions of discrepancies in the resume were allegedly reported.

Indeed, the Buchanans have established their own website, www.ministrywarning.com. They explain its purpose, saying, “This website is posted as a public service warning. The purpose of this website is to give readers factual information so they can make an informed decision about U.S. citizen Ken Parks (aka, Kenneth Floyd Parks) . . . and ETC Ministries (www.etcministries.altervista.org). Because of documented evidence of harm already committed by Ken Parks against numerous people, and his claims to be a Christian ‘ministry leader,’ the information herein is pertinent to public interest and is therefore newsworthy.”

The website also includes numerous links to public documents citing Parks’ arrest record, conviction, statements the Buchanans consider to be at least slanderous and malicious and at worst, life-threatening. Indeed, the avatars Parks uses and the comments he has made apparently continue to draw the attention of federal officials. According to the Buchanan’s website, “In early September, 2005, an agent from the Cyber Crimes department of the Atlanta FBI again confronted Ken Parks about his Internet libel and threats against Scott and Paulette Buchanan specifically and against others generally. Ken Parks was again informed that he is committing very serious libel in that he accuses his victims of crimes they have not committed (e.g., abusing children, filing false police and FBI statements, advocating the murder of abortion doctors). Ken Parks was warned by the FBI agent that his Internet threats are “dangerously close” to getting him arrested under federal law. As a result of Ken Parks’ aggressive and obsessive harassment and smear campaign, authorities are keeping an ongoing record of his activities.” The agent investigating declined comment and the FBI spokesman in Atlanta could not be reached for comment.

While on his own website, Parks claims that this is just a family feud, there is no question that Connecticut authorities consider him a threat. And, he was convicted in Georgia for simple trespass and simple battery as the result of an incident in 1988.

He also has several other arrests for which he has not been convicted. However, Mrs. Buchanan responded, ‘With his conviction, his use of vulgar and threatening language on the Internet, and with an outstanding fugitive warrant from Connecticut, these factors together should certainly make potential supporters of my brother’s ‘ministry’ question whether he is fit for church leadership.”

It also implicitly calls into question the state of the modern church. It would appear that Parks’ “ministry” reach is quite limited. However, that he has so many folks responding to his chat room diatribes — sometimes in support — speaks poorly for the Church. For anyone to embrace doctrinally suspect ministries like these that refuse to be financially transparent truly takes a leap of faith like those folks in the “tent revival” scenes in the movie, “Leap of Faith,” in which Steve Martin portrayed — disturbingly accurately — many of the shenanigans and skullduggery common to the traveling “evangelists.” In fact, such individuals will often claim that they are being persecuted when someone dares attempt to hold them accountable.

So, until Parks agrees to return calls and answer the many questions that should cause any donor pause before supporting him now or in the future, it is incumbent upon Christians to ensure that they are not supporting somebody that is not only not transparent in explaining the purpose and operations of his ministry, but is considered by law enforcement officials as a potential physical threat to those who would dare question him.

Such behavior can be found throughout the Bible. But it is behavior that Jesus condemned, rather than emulated.

Michael Barrick is the Executive Editor of www.barrickreport.com, which offer in-depth exclusives, field reports and commentaries on secular and sacred news. To contact him, write mbarrick@barrickreport.com. 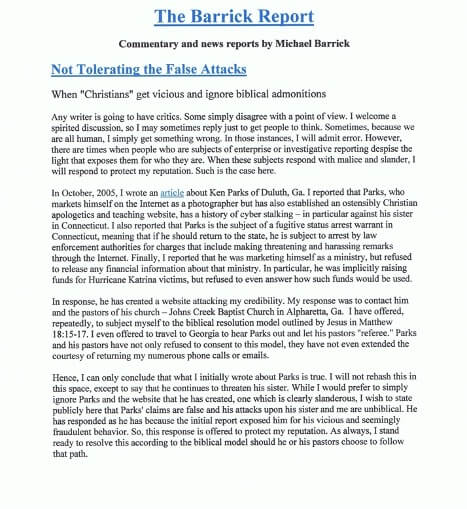