As mentioned previously in this website, my brother Ken “Pastor Max” Parks filed his fourth meritless, abusive pro se lawsuit against my husband and me in Washington County, Tennessee in January, 2018 (Civil Action: 37362) while he still had his third meritless lawsuit against us pending in New London, Connecticut for virtually the same claims (KNL-CV15-5014893-S). He also paid a mere $6.00 each for subpoenas to try to get at our private information, which he had absolutely no legal need to obtain. Our daily monitoring of my brother’s court filings made us aware of this abuse-of-subpoena tactic; again, some state courts do not notify defendants of subpoena filings against them. We immediately notified our attorney, who immediately filed a motion with the court to quash my brother’s meritless subpoenas. We and our attorney also contacted the recipients of those subpoenas and gave evidence of our attorney’s motion to quash my brother’s subpoenas. Two of the recipients helped us and did not provide my brother Ken “Pastor Max” Parks with any information. But we missed by one day notifying another recipient — the Tennessee Revenue Department — to not provide my brother with any of our personal information since our attorney had filed to quash my brother’s subpoenas. The woman we spoke to at the Tennessee Revenue Department was deeply apologetic and told us that if we had contacted her the day before she would not have sent my brother Ken “Pastor Max” Parks all kinds of personal information the Revenue Department has on us, such as the make and model of our vehicles and our banking information.

At the first court hearing the judge expressed shock and outrage at my brother Ken “Pastor Max” Parks’ abuse of the subpoena process and recognized his filing for subpoenas as a completely unjustified tactic to get at our personal information. She ordered my brother to turn over the documents he obtained from the Tennessee Revenue Department containing our personal information, but we all recognized it was too late. She also ordered that she would review any of my brother’s future filings for subpoenas and that he was required to provide her with an affidavit for any future subpoena requests explaining specifically why he believed he needed more of our personal information. He never sought any additional subpoenas in that case. 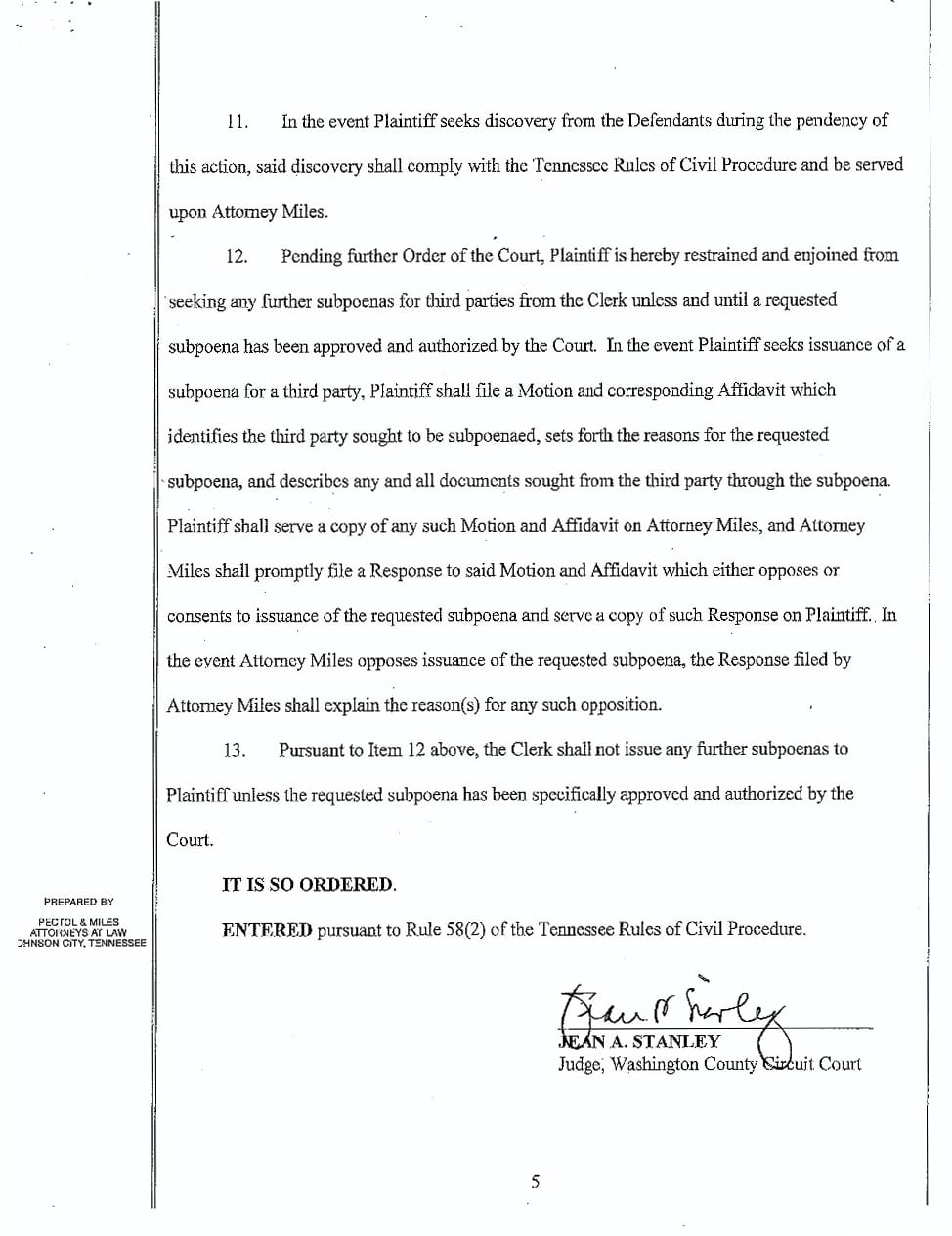 Very quickly, my brother Ken “Pastor Max” Parks abused some of our personal information which he obtained from the subpoena he sent to the Tennessee Revenue Department by libelously claiming in his next filing with the court, a few weeks after the first hearing, that he had recently “witnessed” the make and model of one of our vehicles circling around his house and claiming that we put a package in his mailbox.  He had made a similar (yet contradictory) accusation against us in his third pro se lawsuit which he filed in Connecticut in 2015 but in that case he gave a December 2014 date as to when he claimed that he received by mail a package that he claimed was sent by us.  In previous statements made in court in 2004 and in his online statements, he claimed we placed dead birds with roses in their beaks in his mailboxes at his various residences.  In reality, we’ve never traveled 5 to 5 1/2 hours from where we live in Tennessee or approximately 17-18 hours from where we once lived in Connecticut to either circle around his neighborhood or any of his residences at any time nor have we ever put anything in any of his mailboxes at any of his residences at any place or time.  My brother’s court filing against us was demonstrated to be a lie in our court filings against him in the Tennessee case.  The only thing we’ve ever mailed to my brother Ken “Pastor Max” Parks were cease and desist letters, oftentimes certified, signed by us (sometimes notarized) telling him to stop stalking, defaming, threatening and harassing us.

After my brother Ken “Pastor Max” Parks filed his fourth meritless pro se lawsuit against us in January, 2018, we contacted our Tennessee legislators and found out that other victims of abusive pro se litigants had also contacted their legislators.  An abusive civil litigant bill was proposed in the 2018 Tennessee legislative session, the bill was passed by the legislature, and the abusive civil litigant bill was signed into law by Tennessee Governor Bill Haslam in May, 2018.  That Abuse of Civil Action law went into effect July 1, 2018, with retroactive powers to assist victims who were currently being sued by an abusive litigant.

This judgment and injunction can also be presented to a court by us and anyone else as a defense in the civil protective order process so as to receive full faith and credit in case my brother Ken “Pastor Max” Parks tries to file, with or without an attorney, any meritless protective order petitions (which are civil actions) against us or anyone else in any U.S. state or U.S. territory. 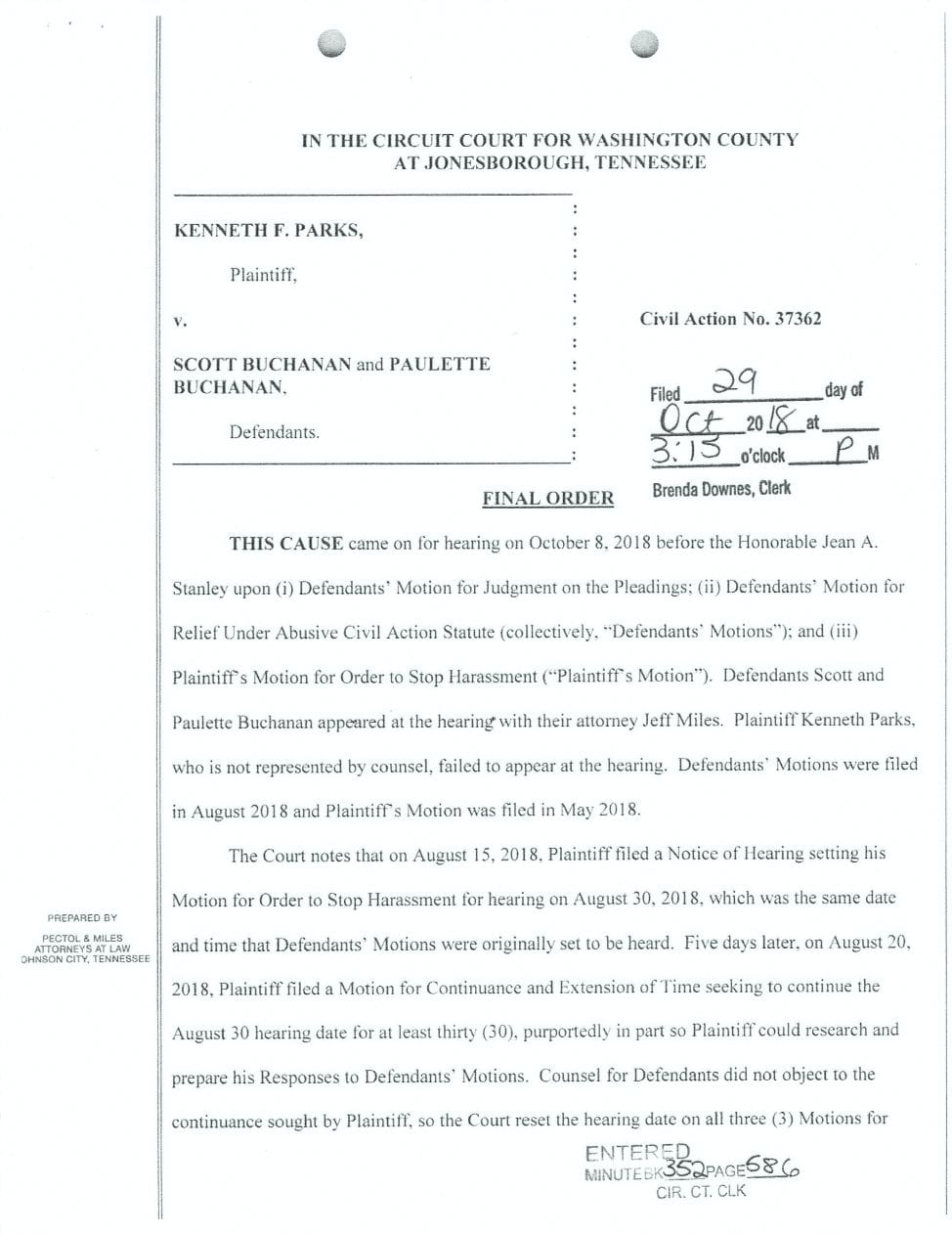 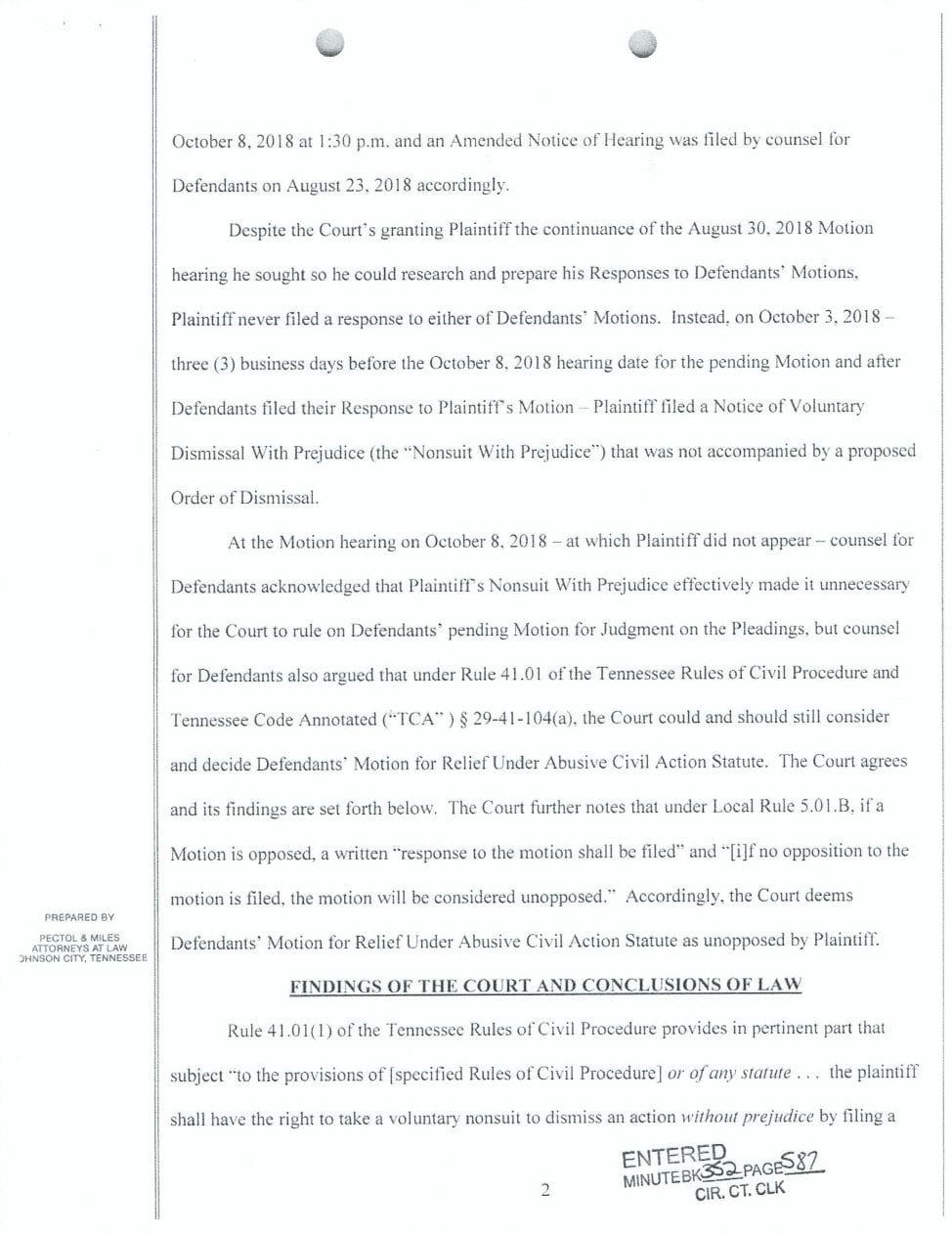 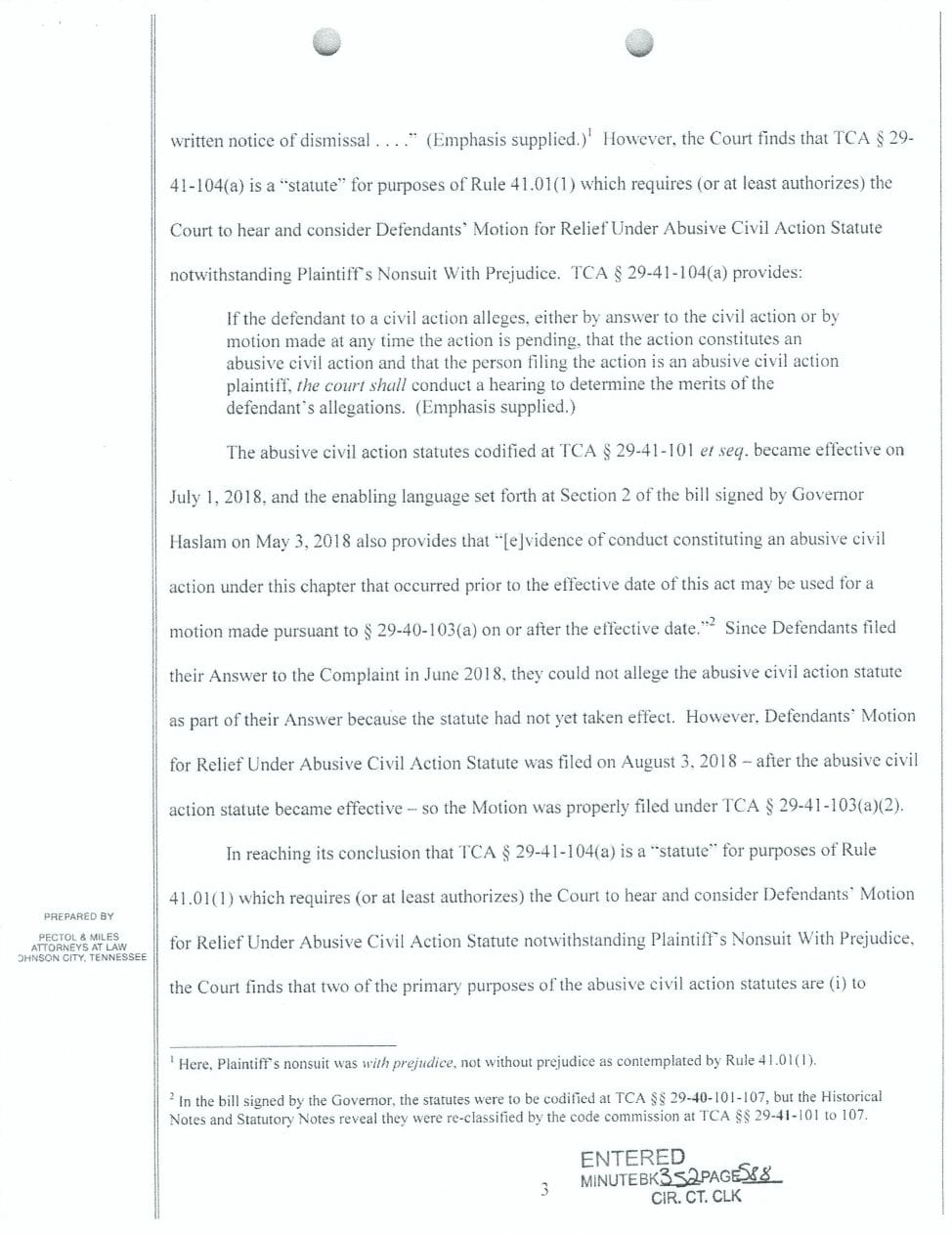 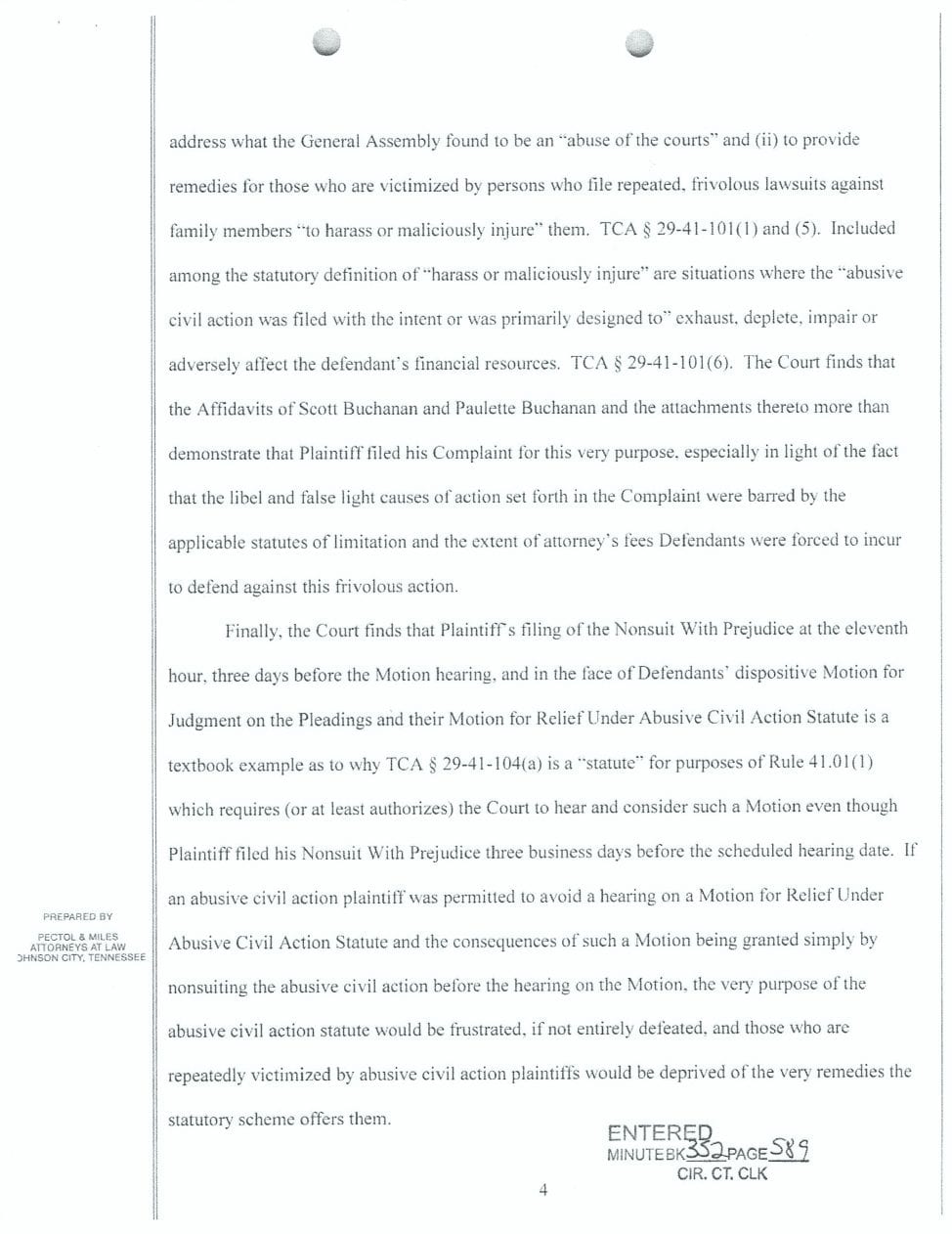 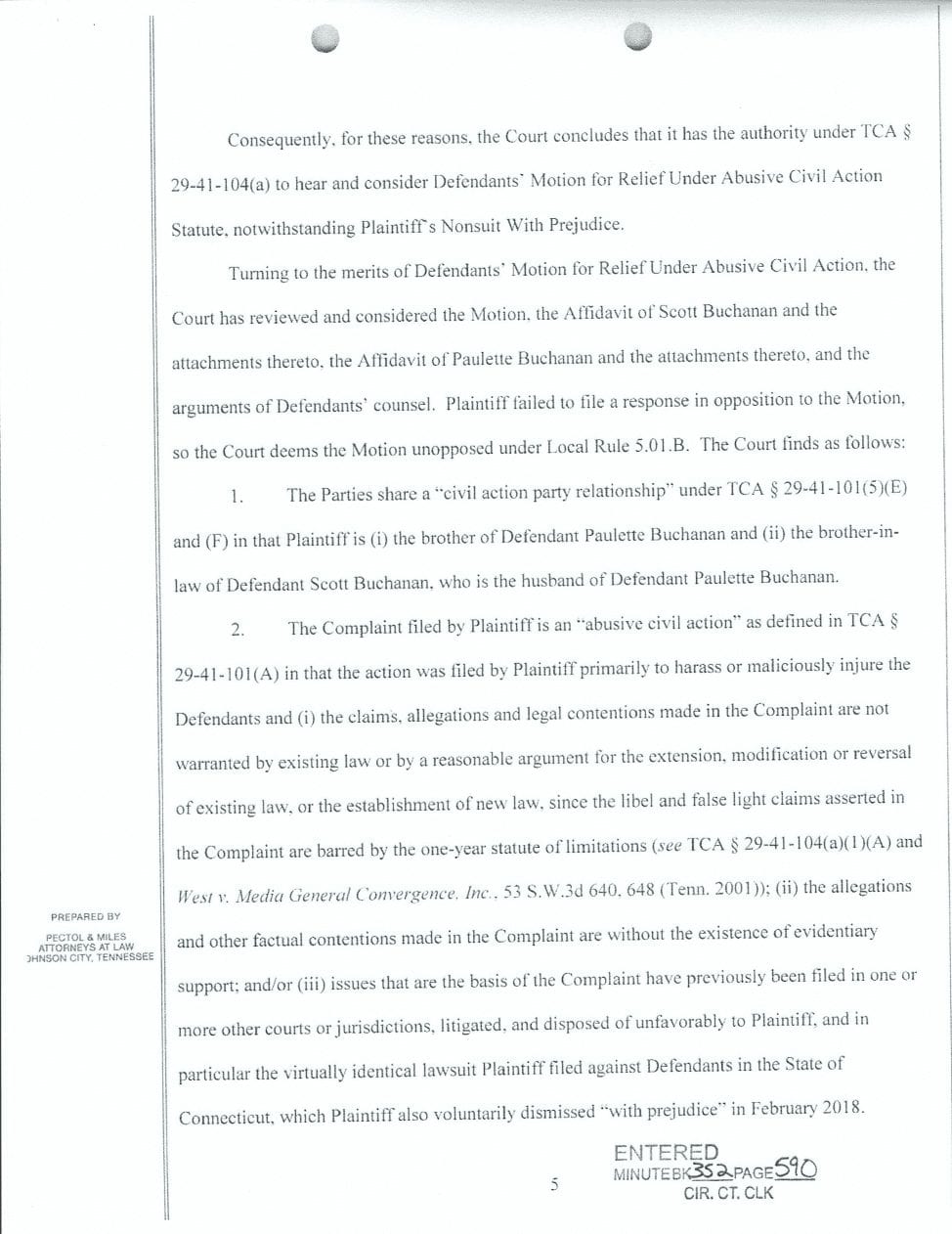 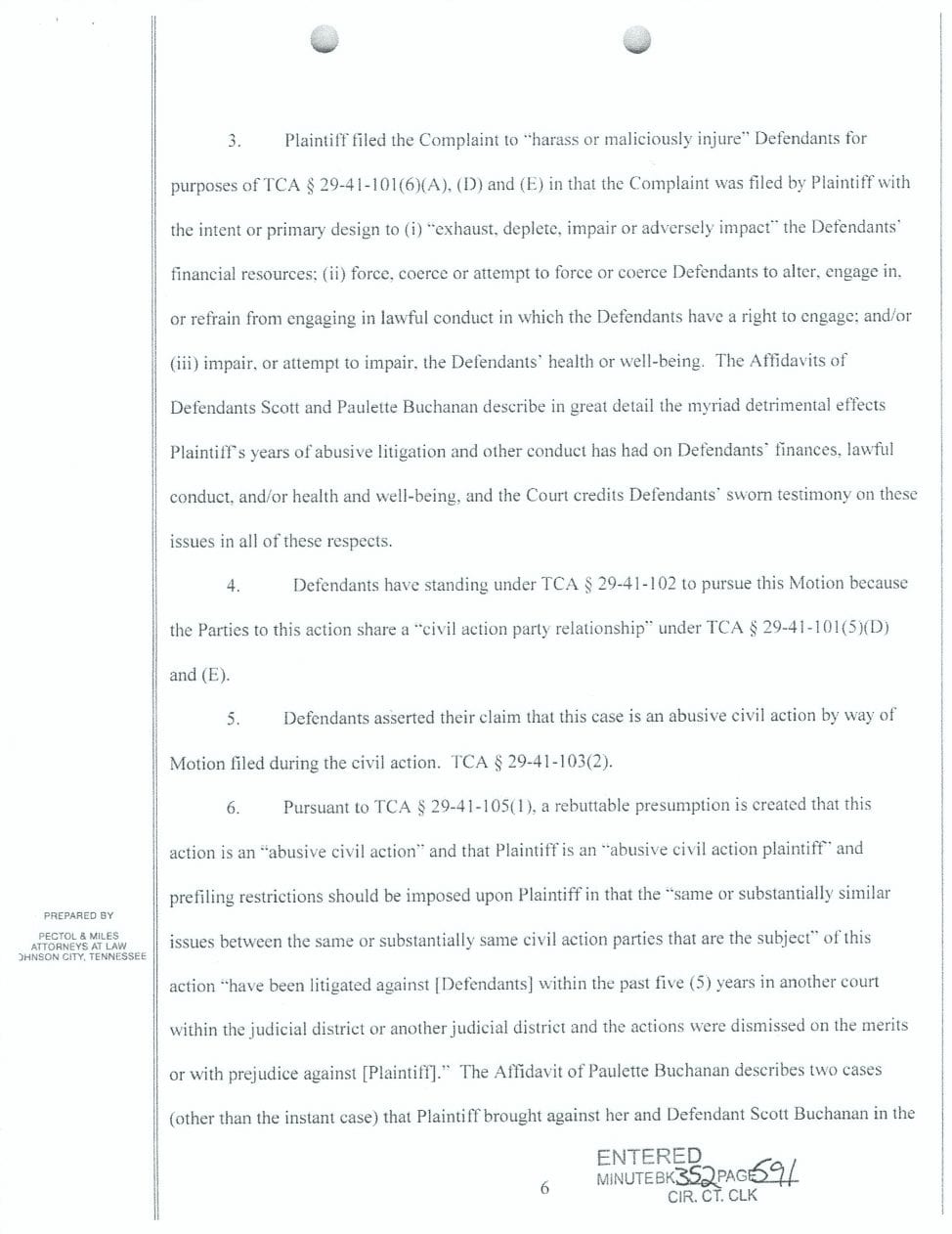 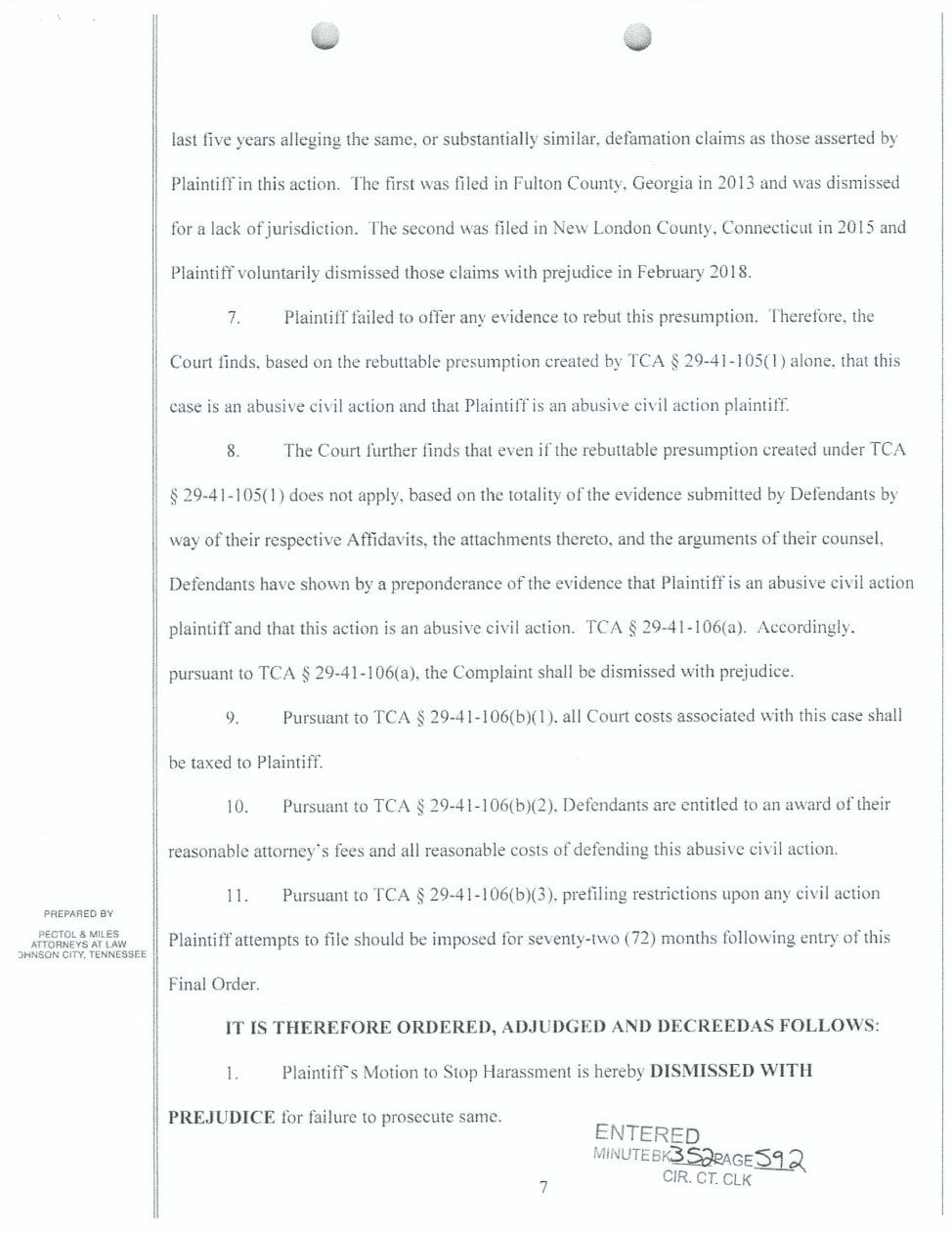 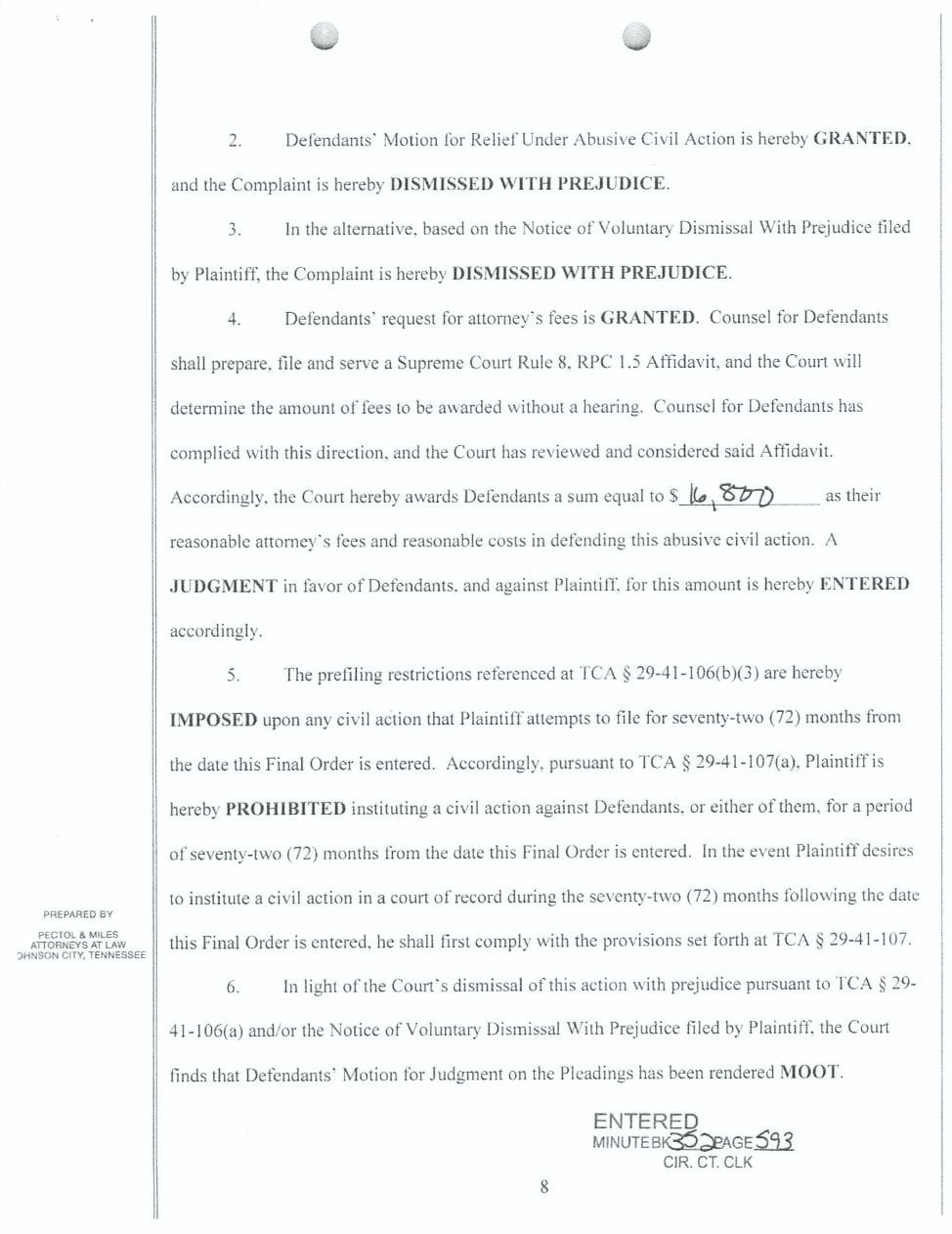 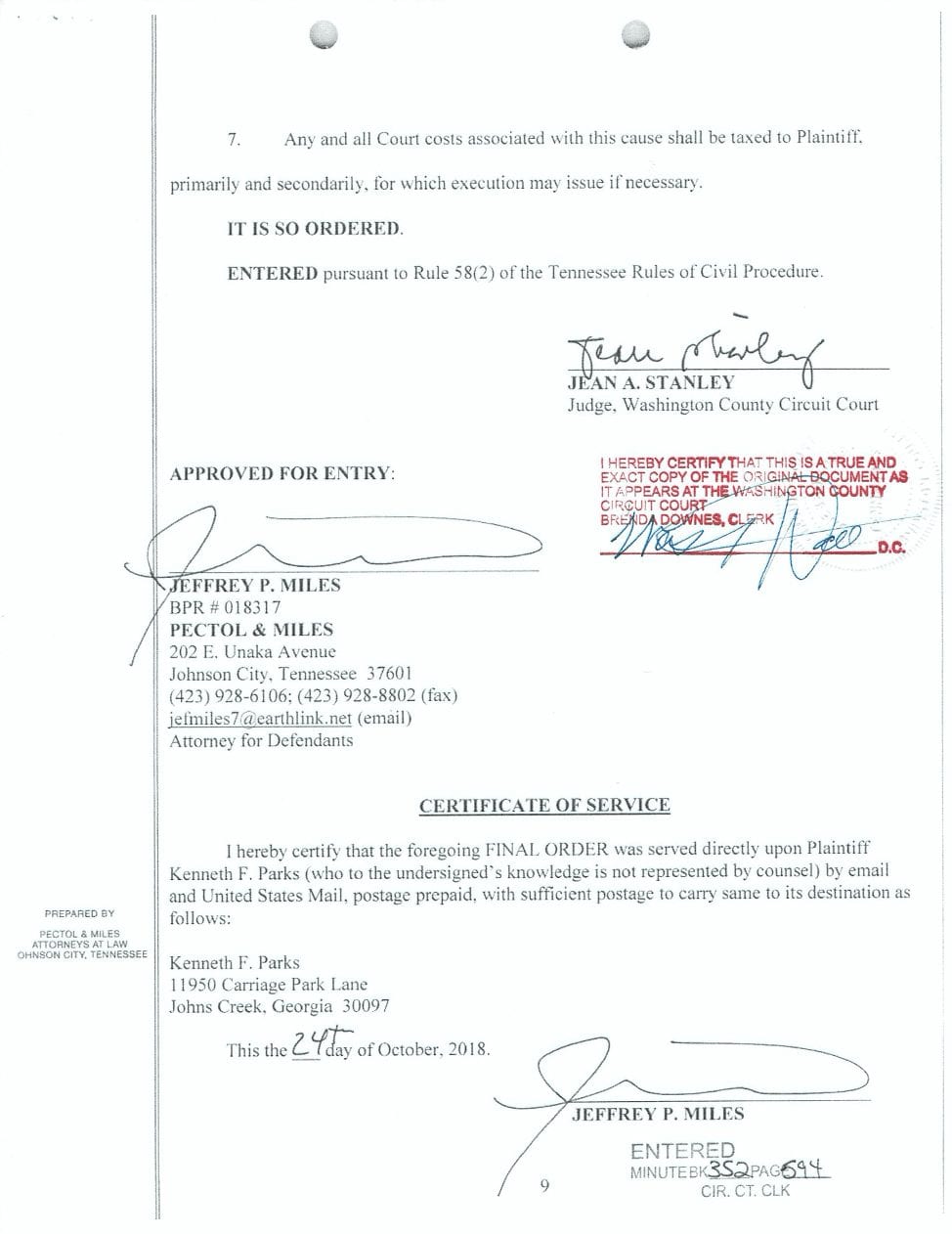 Our judgment with injunctions against my brother Ken “Pastor Max” Parks has been domesticated and/or granted full faith and credit in: 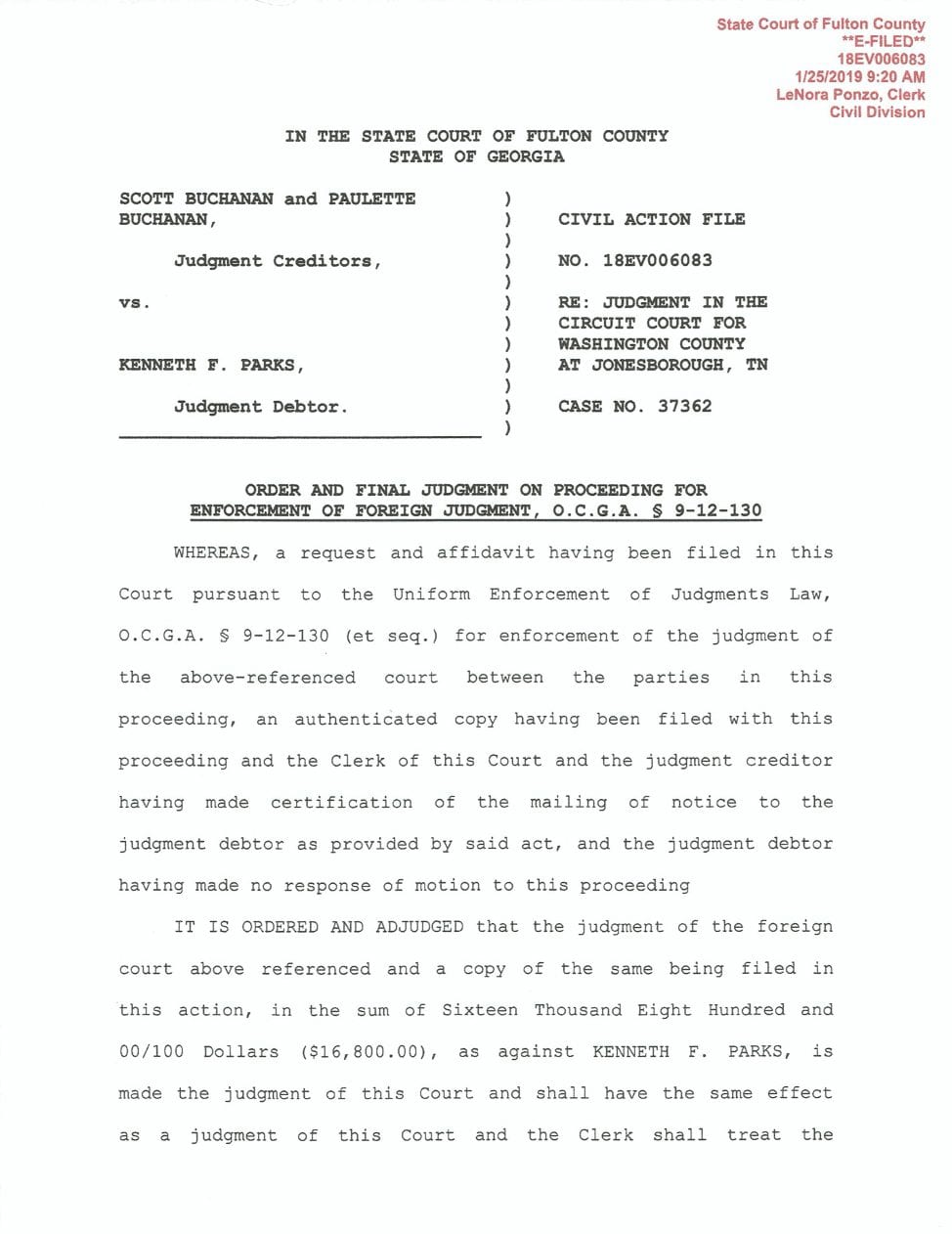 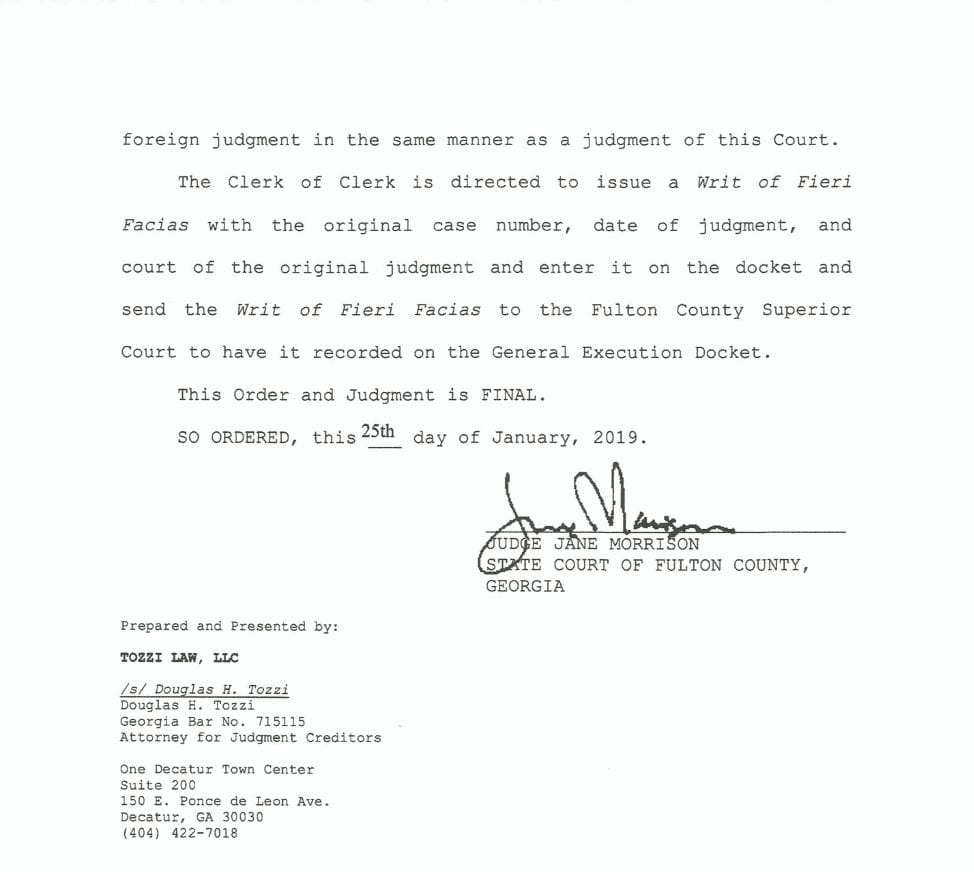 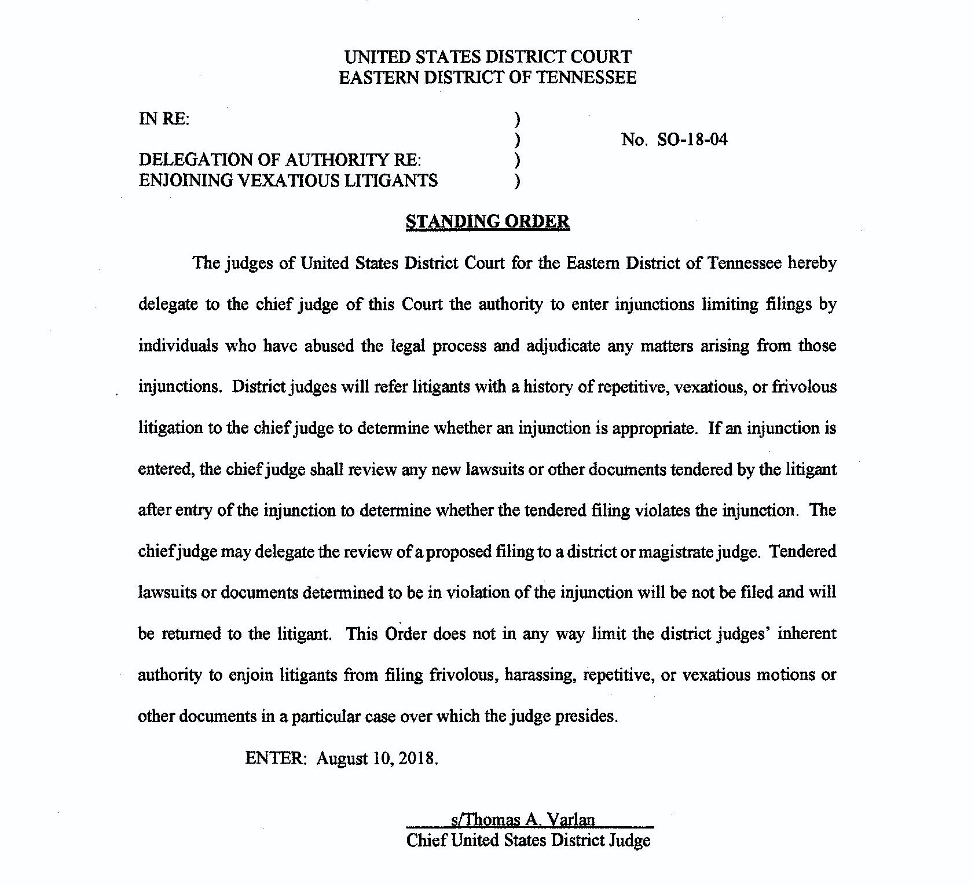 We sent a copy of the Tennessee judgment declaring my brother Ken “Pastor Max” Parks to be an abusive litigant to Judge Thomas Varlan.  His secretary forwarded it on to the federal court’s clerk’s office, who called us to confirm that my brother Ken “Pastor Max” Parks has been added to the Eastern District Tennessee federal court’s vexatious litigant list. 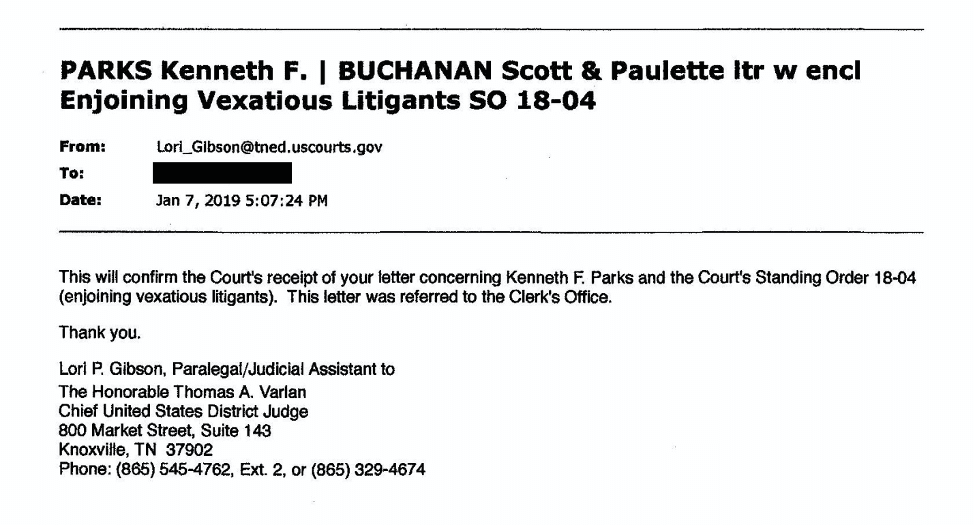 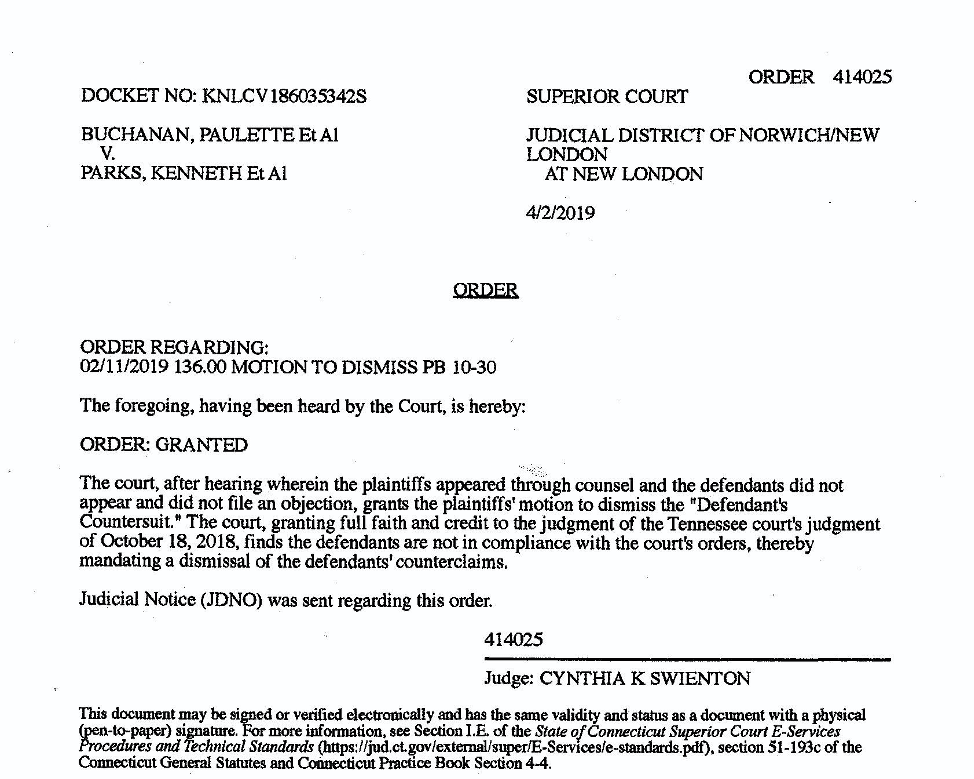