For many years late night talk show host David Letterman has had to deal with stalkers.  One of those stalkers, Colleen Nestler — whom David Letterman had never met — succeeded in 2005 in getting a protective order against David Letterman in New Mexico by claiming in her seven page filing that since 1994 Letterman had communicated to her through the telecast of his show by using coded messages, “eye expressions,” and making other gestures which Nestler claimed represented Letterman’s marriage proposal to her and offering her a job as his co-host.  Nestler further claimed in her protective order petition that Letterman’s coded messages and gestures on his show (filmed in New York) harassed and tormented her (in New Mexico).  Nestler continued to claim that David Letterman had caused her to go into bankruptcy and caused her immense mental anguish.  Nestler asked that the protective order keep Letterman at least three yards away from her (very easy for Letterman to do since he lived and worked in the northeast U.S.!) and that the court issue an injunction against Letterman to order him to no longer “think” about her and stop all of the tormenting harassment she claimed Letterman was doing to her via his coded messages and gestures which she claimed he was making toward her on his show.

Letterman had to hire a New Mexico attorney to appeal his stalker’s civil protective order.  Judge Sanchez is on record initially refusing to dismiss or apologize for his issuance of the baseless protective order against David Letterman, claiming that Nestler’s court forms were filled out “correctly.”  After much pressure and public shaming, Judge Sanchez finally dismissed Nestler’s protective order.  As a number of legal commentators have published, this is rarely the case for the average non-celebrity person who finds out there is a totally baseless and unjustified protective order slammed against them.

The protective order hearing in Fulton County magistrate court presided by Judge Allyson Pitts was a nightmare.  She was rude to attorneys, petitioners, and even to the court security staff.  The courtroom was crowded and only a few petitioners had attorneys.  Much of the time Judge Pitts was typing on her keyboard and didn’t appear to be giving the necessary attention to the cases.  Our case was finally heard in the early afternoon after we were forced to sit there and listen to case after horrific case since early morning.

We presented clear irrefutable evidence of my brother Ken “Pastor Max” Parks’ harassing, defaming, stalking, and threatening us, which included his own writings to us, his own published statements, police reports and other documentation, as well as the fact that his defamatory and unsubstantiated counter protective order petition was filed too late against us in violation of Georgia Code (see below).  My brother Ken “Pastor Max” Parks made his typical ad hominem defamatory and libelous attacks against us, claiming (lying) that my husband and I are “anti-abortion domestic terrorists who kill abortion doctors!” and that we’re “wanted criminals!” with “criminal records!”  He also claimed that we were driving our vehicle around his neighborhood and his residence (which is approximately a 5 to 5 1/2 hour drive from where we lived).  He presented an undated package and unsigned letter claiming (falsely) that we mailed the package with the object through the postal service — yet the package had no postal date or other authenticating postal marks.  My brother Ken “Pastor Max” Parks slammed and threw around his stack of papers (which he never presented at the hearing), tried repeatedly to approach Judge Allyson Pitts despite her warnings and the warnings from the security staff in the courtroom, and he tried to approach us despite being warned to stop.  We petitioned at one point that Judge Pitts order my brother Ken “Pastor Max” Parks and his wife Joni Parks to remain in the courtroom for at least 15 minutes after our hearing so that we could safely leave the courthouse.

Judge Allyson Pitts was clearly intimidated by my brother’s overwhelming unstable behavior in the courtroom, she stopped the hearing short, and she abruptly left the courtroom while the security staff escorted my brother Ken “Pastor Max” Parks and his wife Joni Parks back to their seats.

We got the protective order against my brother, which banned his guns.  But as a horrific shock to us Judge Allyson Pitts violated Georgia statute, as seen below, and granted my brother’s baseless and defamatory filing for a counter-protective order against us, even though he had filed it late in violation of Georgia Code and presented absolutely no proof whatsoever for his libelous and slanderous claims.  But important to note is that the protective order against us did NOT ban our guns.  Judge Pitts did grant us our request to leave the courtroom first and ordered that my brother Ken “Pastor Max” Parks and his wife Joni Parks be held back so we could have enough time to safely leave the courthouse.  The Georgia Code states (emphasis added):

GA Code §19-13-4  “The court shall not have the authority to issue or approve mutual protective orders concerning paragraph (1), (2), (5), (9), or (11) of this subsection, or any combination thereof, unless the respondent has filed a verified petition as a counter petition pursuant to Code Section 19-13-4 no later than three days, not including Saturdays, Sundays, and legal holidays, prior to the hearing and the provisions of Code Section 19-13-4 have been satisfied.” (Emphasis added). 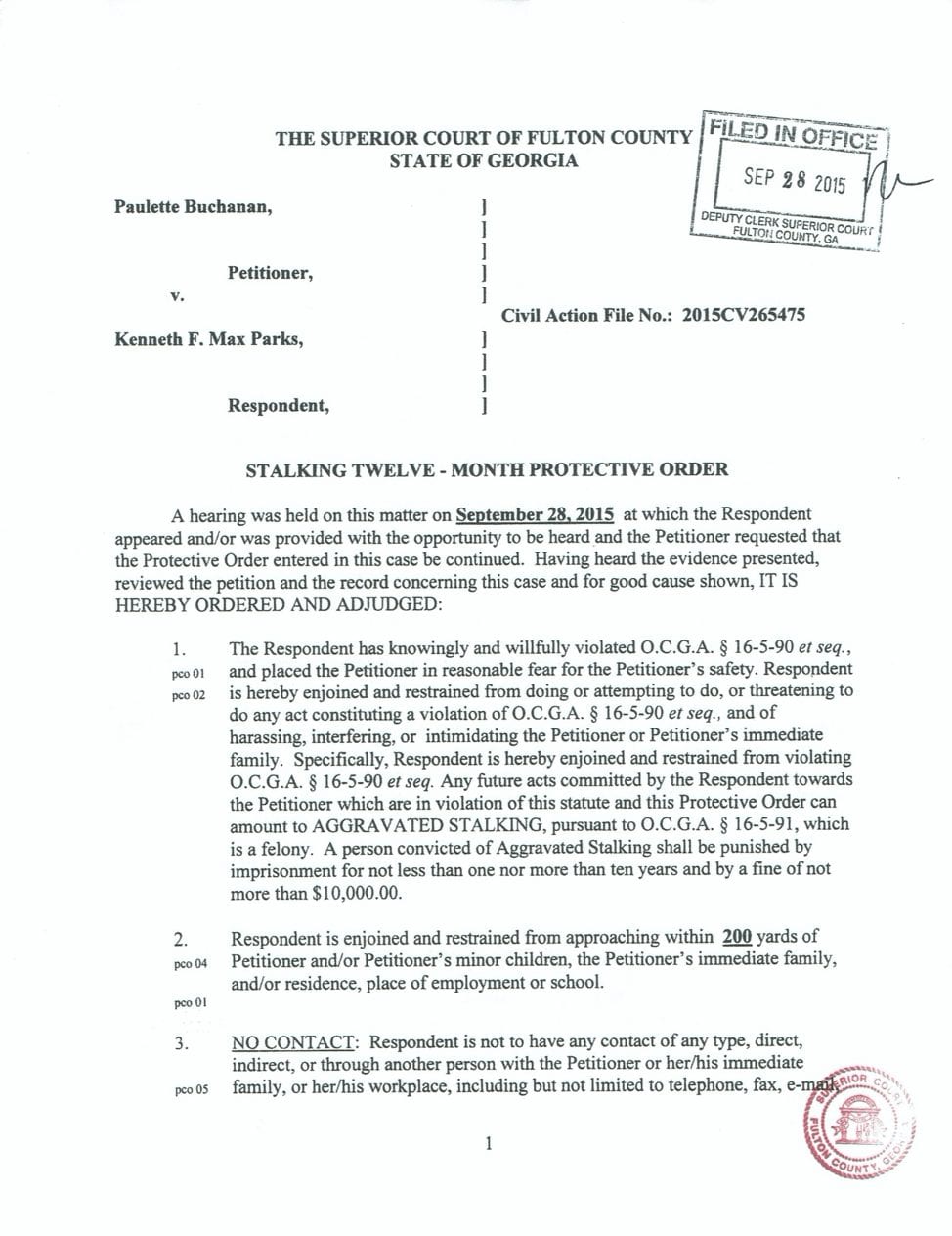 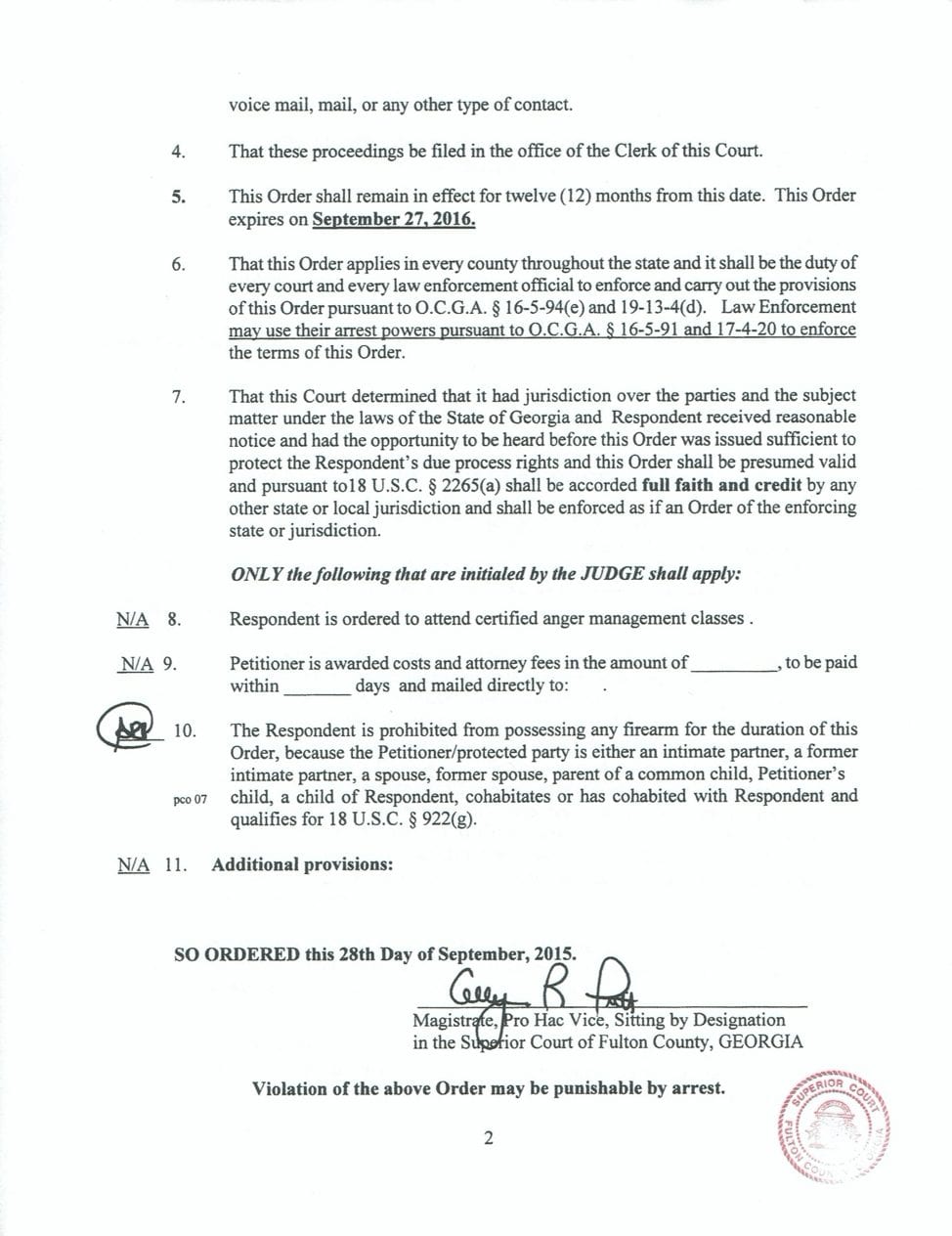 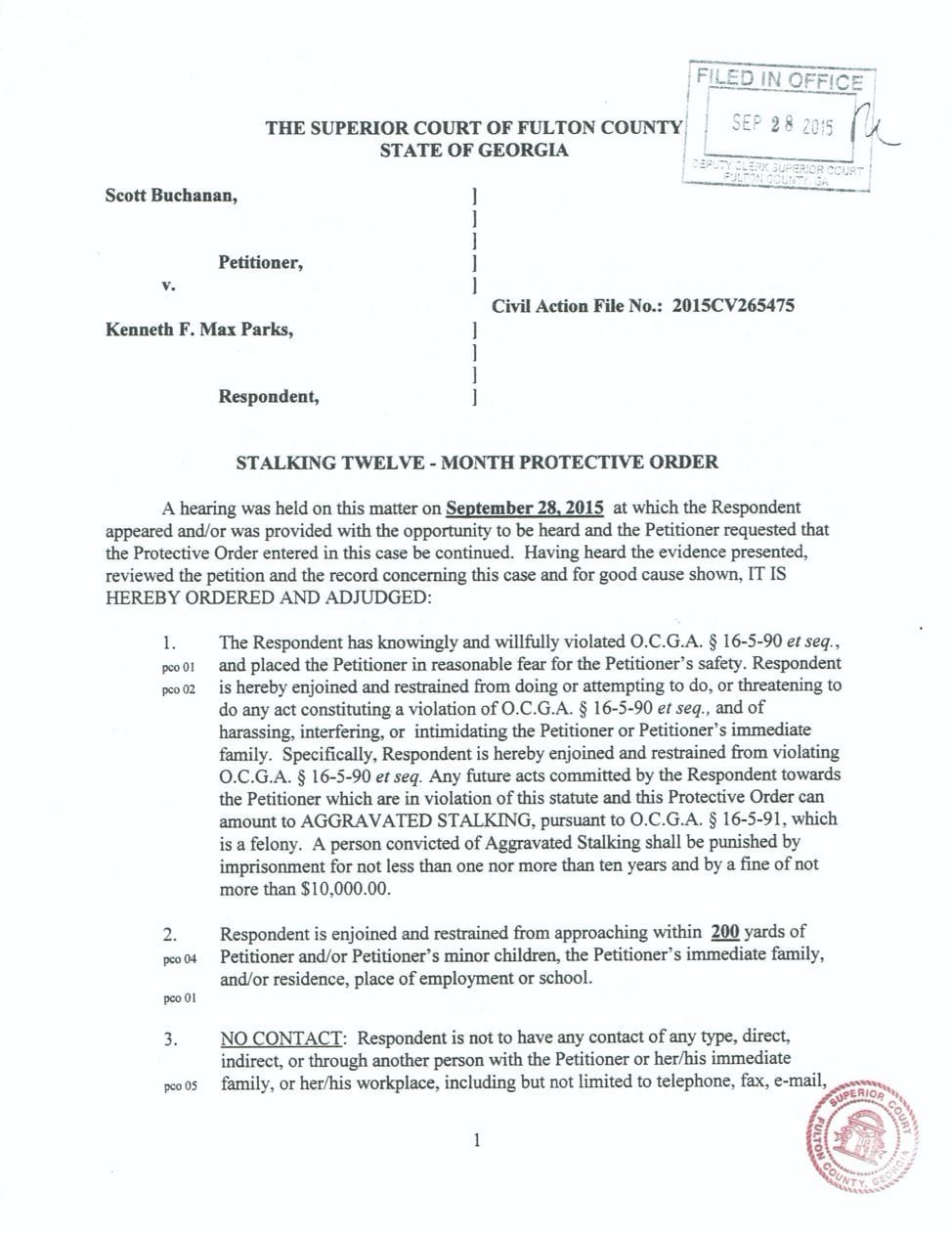 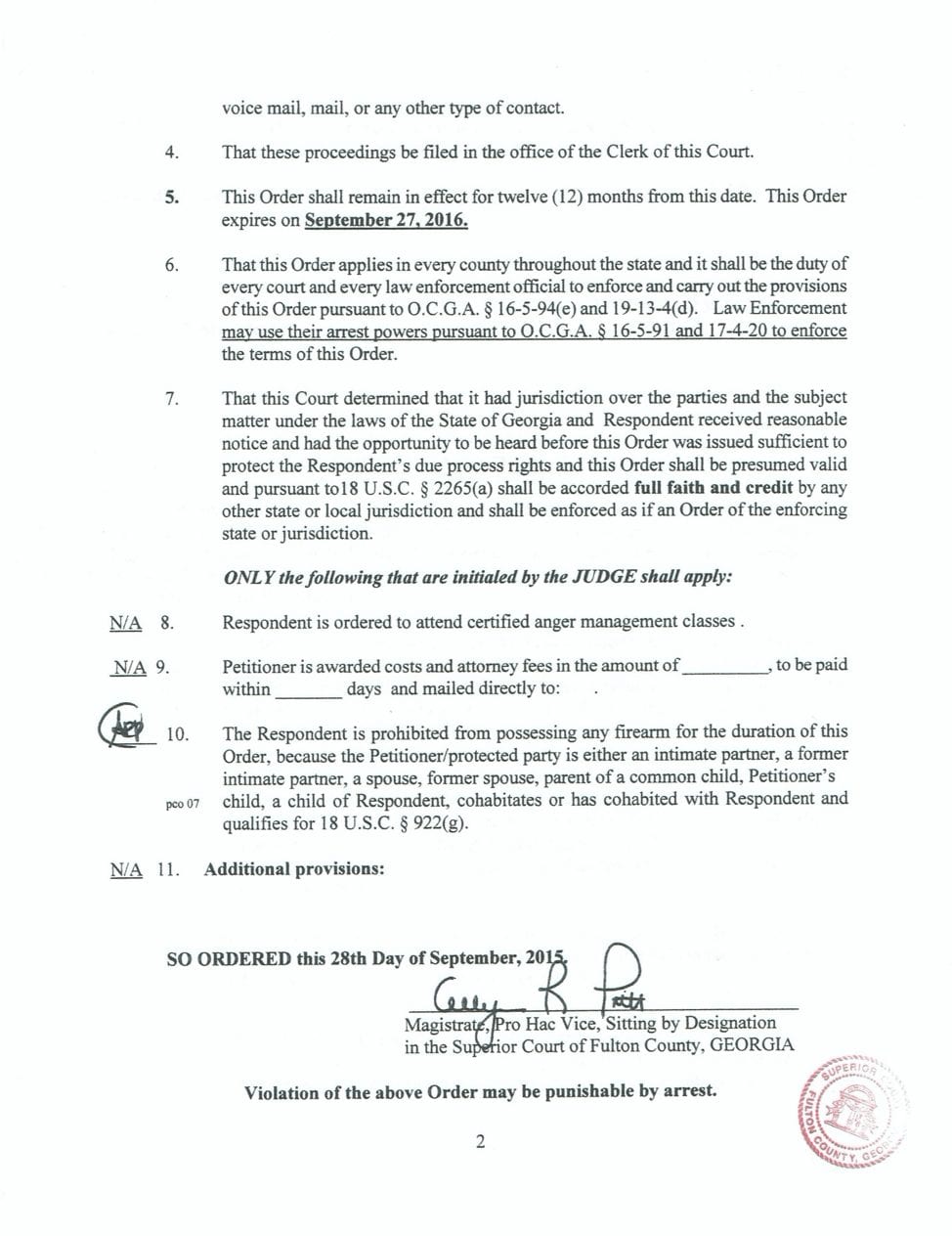 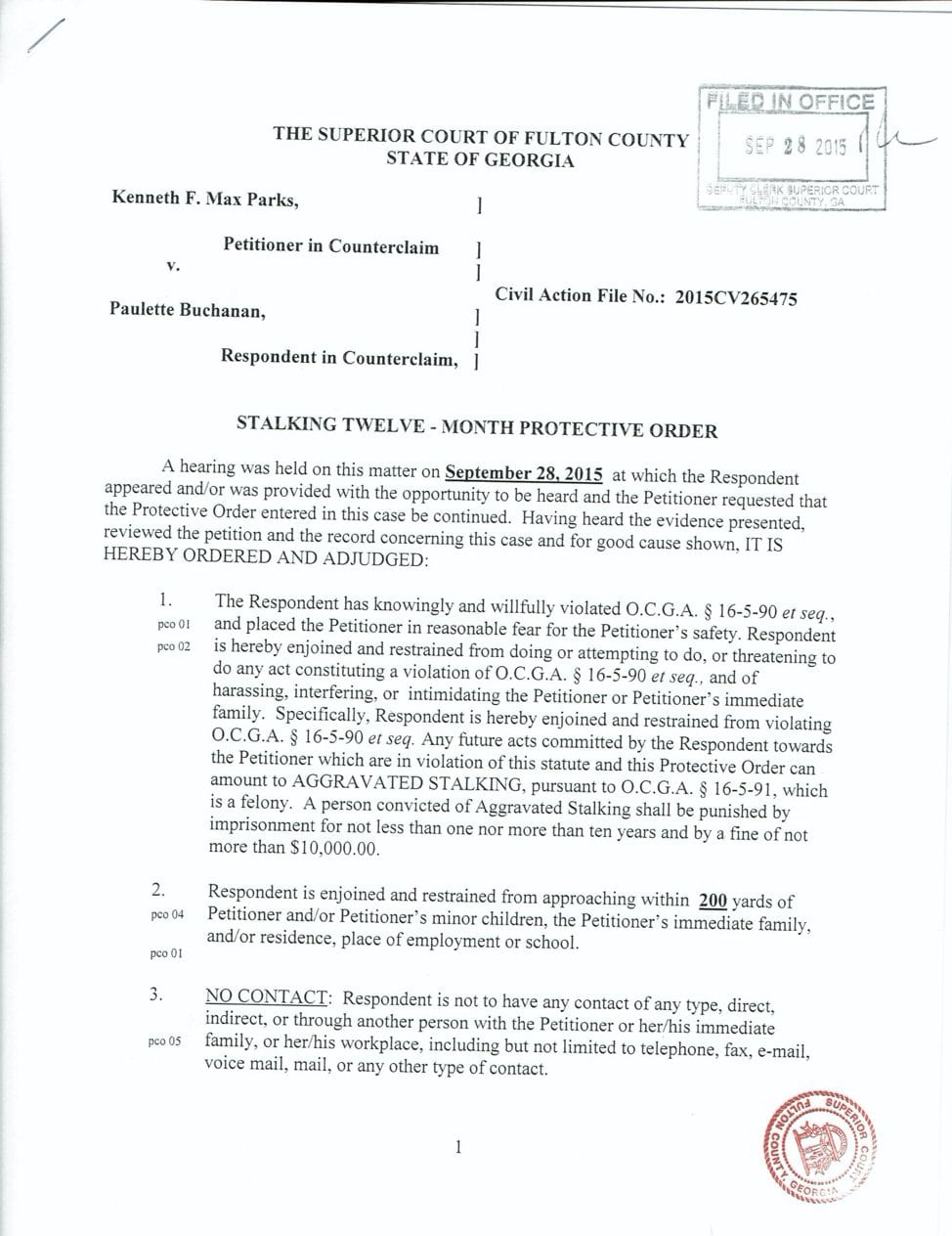 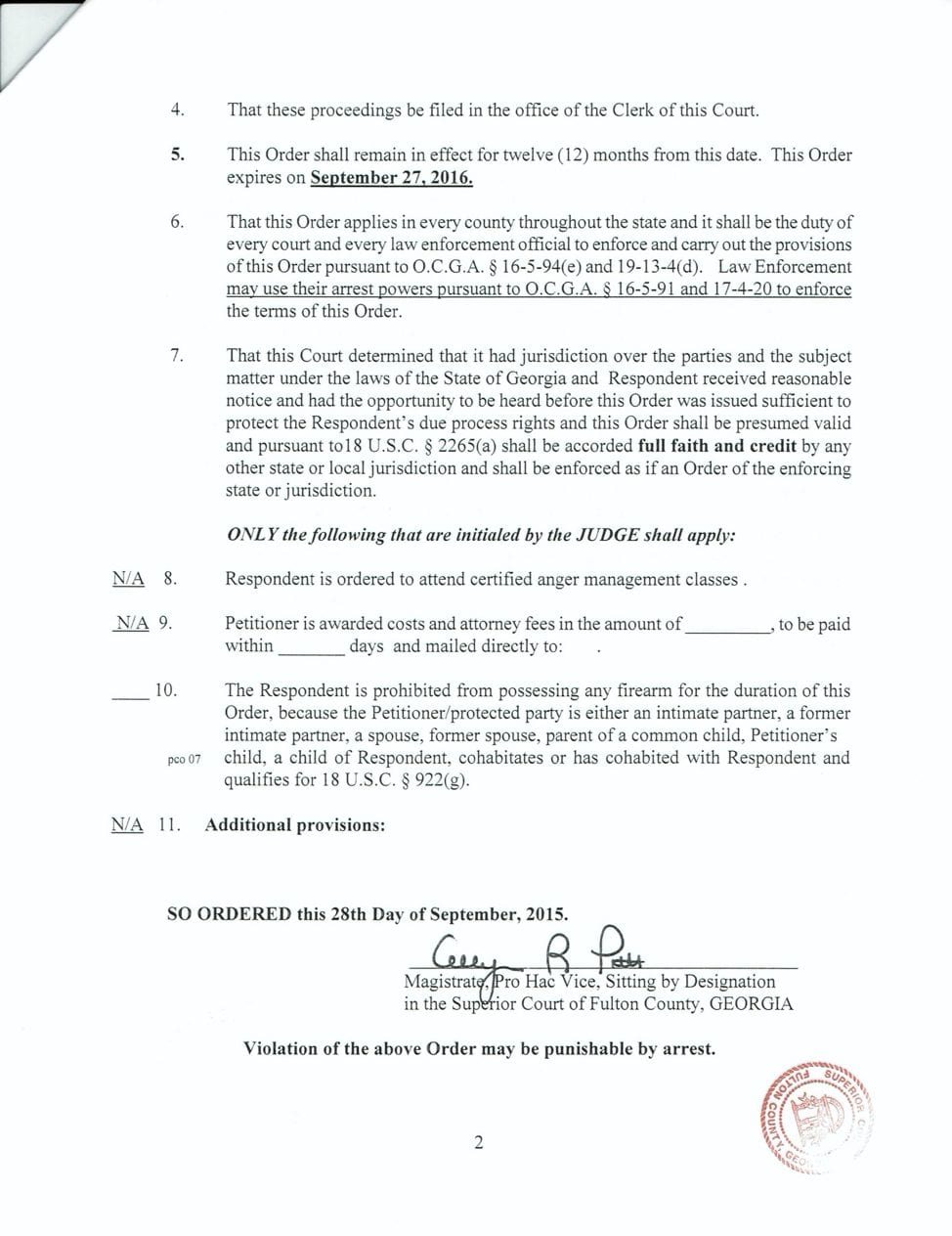 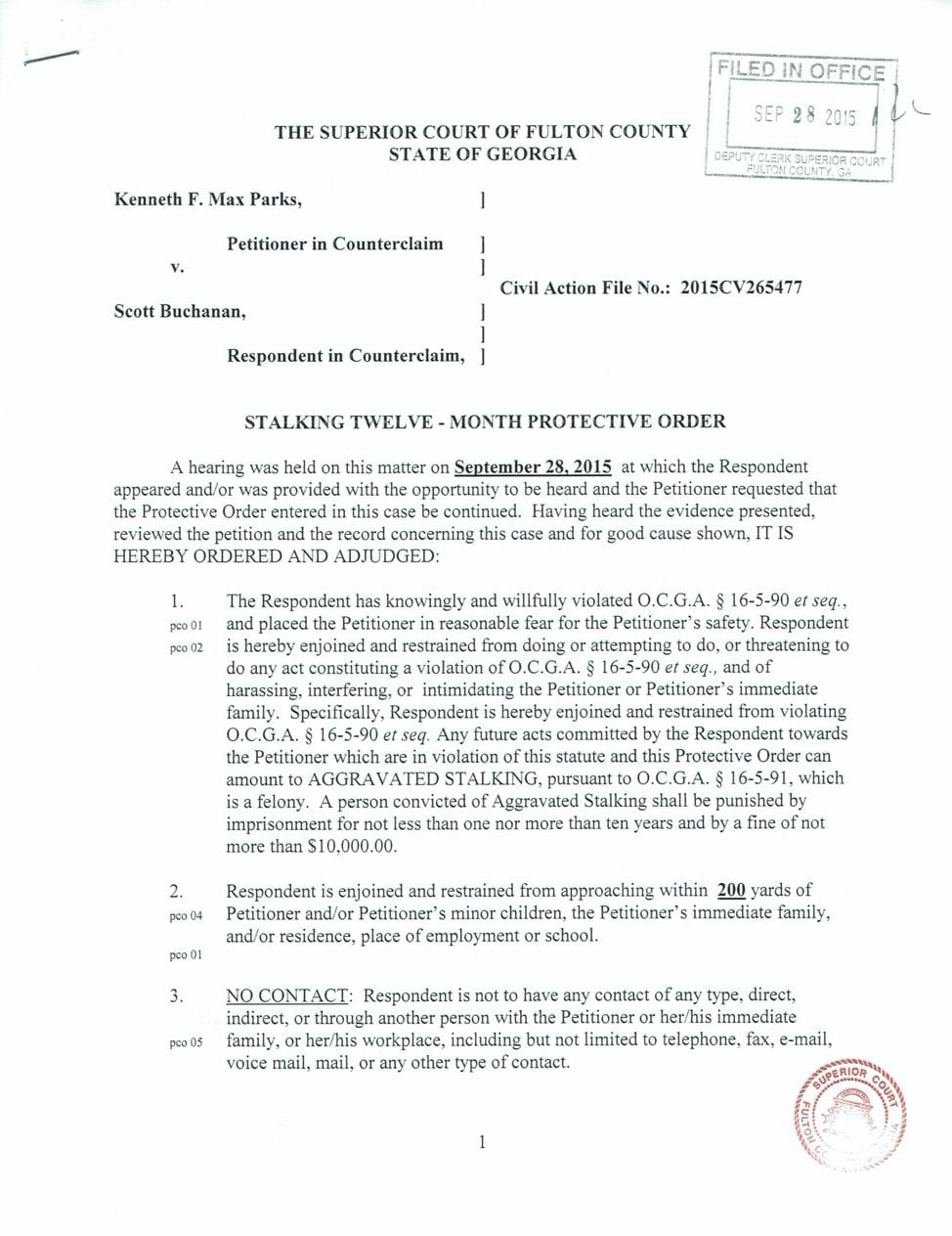 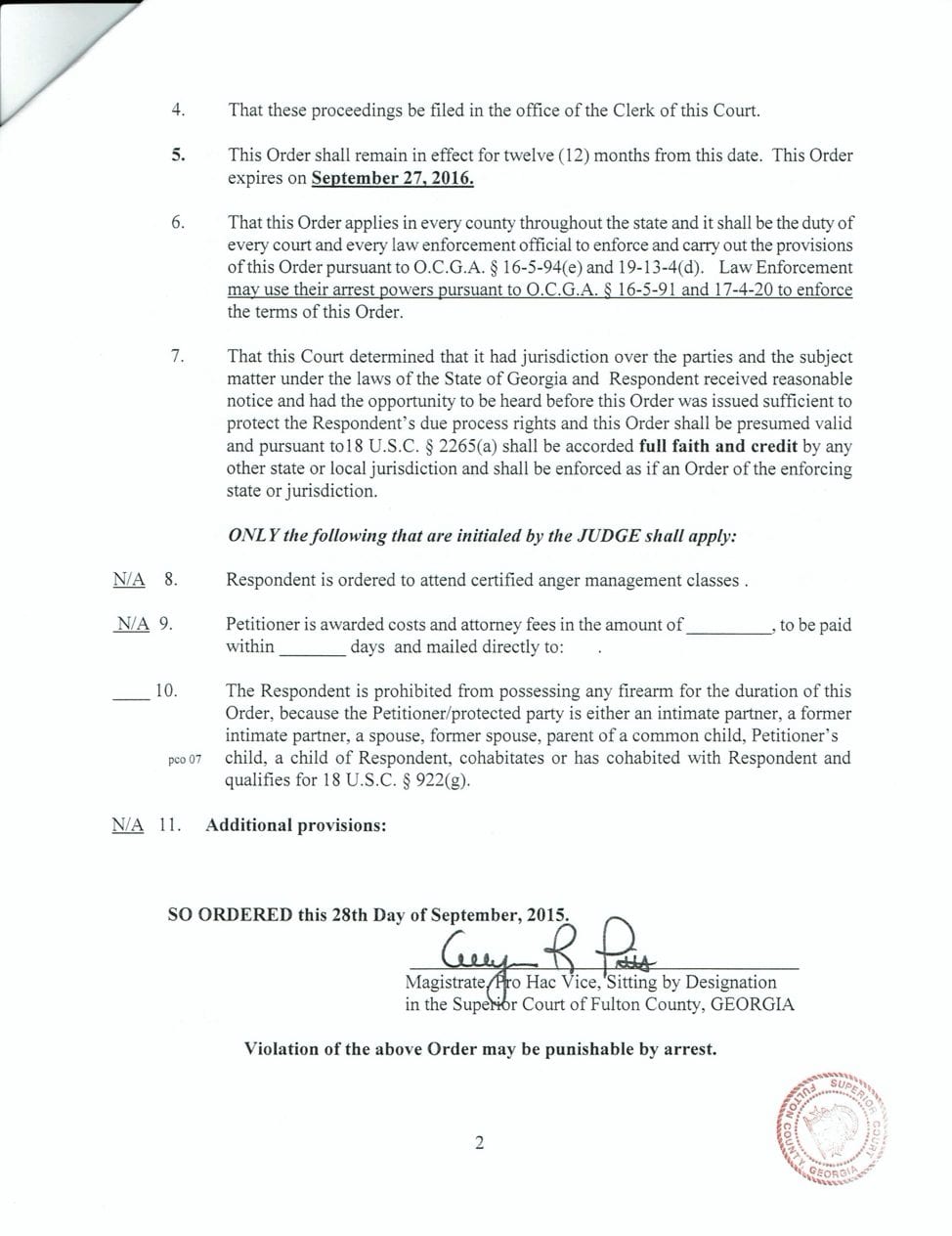 We were finally able to find an attorney to not only fight my brother Ken “Pastor Max” Parks’ defamatory claim that we violated the protective order but also file a truthful counterclaim that it was my brother who in fact was violating the justified protective order we had against him due to his continued online defamation and threats against us and his continued possession of his guns.

At the next hearing Judge Allyson Pitts did not give any validity to my brother Ken “Pastor Max” Parks’ false claims that we violated the protective order, but neither did she uphold the law (yet again) for our justifiable claim of my brother actually in fact violating the protective order we had against him by his continued possession of his guns and continuing his online defamation and threats against us.  Nonetheless, Judge Pitts did, at our attorney’s request, hold back my brother Ken “Pastor Max” Parks and his wife Joni Parks again, as she had done in the first hearing, so that we and our attorney could safely leave the courthouse.

Our valid concern for anyone in the general public is that my brother Ken “Pastor Max” Parks will continue to weaponize the courts against people to file pro se his meritless, defamatory lawsuits, abuse subpoenas to obtain without any justification people’s personal information, file baseless, lying-under-oath protective order petitions against innocent people, make false complaints to various police departments trying to seek arrest warrants against his innocent victims and manufacture fraudulent “official” documents against innocent people he publicly defames and harasses.